The trachea is commonly known as the windpipe, It is a cartilaginous tube, It connects the larynx to the bronchi of the lungs, It allows the passage of air, It is composed of about 20 rings of tough cartilage, the back part of each ring is made of muscle and connective tissue. It divides into two smaller tubes called bronchi: one bronchus for each lung.

The trachea is a tube about 4 inches long and less than an inch in diameter in most people, It begins under the larynx (voice box) and runs down behind the breastbone (sternum).

Bronchi: The trachea terminates at the level of T4 by dividing into right and left main bronchi which are asymmetrical.

Differences between right and left bronchi

The trachea divides into right and left main bronchi, with more division of the main bronchi it gives rise to lobar then segmental bronchi. Each segmental bronchus is distributed to a localized part of lung tissue forming what is called the broncho-pulmonary segments.

Divisions of the bronchial tree: 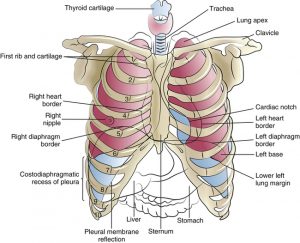 The thoracic cavity consists of:

It is a closed serous sac that is invaginated by the lung from its medial side.

Parts of the parietal pleura

The cervical pleura is covered by a fibrous membrane spreading fanwise from the seventh cervical transverse process to the inner border of the first rib.

Oblique fissure: Rt. Lung: From the 3rd spine to the 6th costochondral junction in the mid-clavicular line.

Horizontal fissure: Rt. Lung: It corresponds to the 4th rib.

Oblique fissure: Lt. Lung: From the 3rd spine to the 6th costochondral junction in the mid-clavicular line.

Horizontal fissure: Lt. Lung: It corresponds to the 4th rib.

Nerve supply of the pleura

Arterial supply of the pleura