The fibers of each optic tract then synapse in the dorsal lateral geniculate body of the thalamus (LGN), and from there, geniculocalcarine fibers pass by the way of optic radiations (also called geniculocalcarine tract) to the primary visual cortex located mainly in the calcarine fissure area of the medial occipital lobe (Brodmann’s area 17), The areas surrounding it (areas 18 and 19 are the visual association areas.

Visual fibers give some collaterals that pass to other areas of the brain: 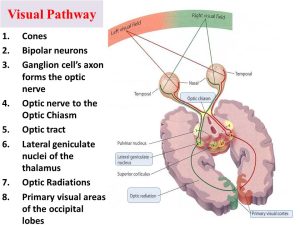 LGB is not only a relay station (3rd) order neuron in the visual pathway but also it receives cortical efferent fibers. This cortical projection to LGB may determine the type of visual stimuli that will be allowed to travel to consciousness and which are suppressed.

Area 17 in the occipital lobe has unusually thick layer IV because of large input from LGB. Layer IV is subdivided into a, b, c. Most of the projection from the thalamus goes to layer IV c. The visual cortex is organized into vertical columns of cells that detect lines at particular orientation in the visual field. Interspersed between these orientations columns are specific color blob areas for color vision.

The functions of neurons in the primary visual cortex V1

The primary visual cortex projects to area 18 and from there to other cortical association areas 21,20,19 and 7, These areas are essential for the analysis and interpretation of the retinal images.

The pathways for analysis of visual information

Because the fibers from the nasal portion of the left retina cross to the right side at the optic chiasma, all the information about the left visual hemifield is directed to the right side of the brain through the right optic tract. Each optic tract fibers represent the contralateral half of the visual field.