The CT cells are grouped into fixed (resident) cells and transient (wandering) cells, resident cells have developed and remain within the connective tissue, where they perform their functions, these fixed cells are stable, long-lived and they include: fibroblasts and fat cells. The transient cells originate in the bone marrow and they circulate in the bloodstream, upon receiving the proper stimulus or signal.

Connective tissue cells originate from the undifferentiated mesenchymal cells while others from hemopoietic stem cells. The transient cells leave the bloodstream and migrate into the connective tissue to perform their specific functions, most of these cells are motile, short-lived and they must be replaced from a large population of stem cells, transient cells include; white blood cells and plasma cells. 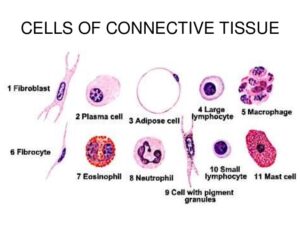 Histological features: they are stellate cells with few processes, they have euchromatic nuclei with faint basophilic cytoplasm.

Function: they are adult stem cells that can divide and differentiate into many types of CT cells.

Fibroblasts are the most common cells in CT.

Fibrocytes are smaller cells with fewer processes than fibroblasts. By LM, the cell has a small elongate, heterochromatic nucleus, and eosinophilic cytoplasm. By EM, they have fewer rER and small Golgi.

Function: maintenance of the CT matrix, however, if the matrix is injured, they can easily return to their more active state (fibroblast) to repair and regenerate the matrix.

The function of mast cells

They initiate allergic and local inflammatory responses by releasing (degranulation) of their granules which contain; the anticoagulant, heparin, and histamine which promotes increased vascular permeability and smooth muscle contraction.

Macrophages are derived from the monocytes that migrate from the bloodstream into CT.

Function: They are phagocytic cells; macrophages engulf a broad variety of foreign materials including bacteria, dead cells, and dust particles.

Plasma cells are derived from B lymphocytes that enter the CT.

Function: they are responsible for the synthesis of antibodies against bacteria and foreign proteins penetrating into the CT.