The Respiratory Chain Electron Transport Chain (ETC) is the final common pathway in aerobic cells by which electrons derived from various substances are transferred to O2 to form H2O. ETC is formed of a series of electron carriers, which catalyze the transfer of electrons from reduced coenzymes to oxygen to form water. Part of the energy released is utilized for the synthesis of high-energy phosphate bonds (conversion of ADP+ Pi- ATP).

Components of the respiratory chain

Complex I is (NADH-:ubiquinone oxidoreductase, or NADH dehydrogenase). It is formed of Many polypeptides, FMN coenzyme, and Seven-iron sulfur centers (fes) which are necessary for the transfer of hydrogen atoms to the next member of the chain coenzyme Q. It catalyzes the transfer of electrons from NADH + H+ to coenzyme Q (ubiquinon), electrons or hydrogens are transferred from NADH to FMN then to different fes centers, and finally to UQ to form reduced UQH2.

Complex II: ( succinate: ubiquinone oxidoreductase) Is formed of Succinate dehydrogenase, Two iron-sulfur centers, and FAD coenzyme. It catalyzes the transfer of electrons or hydrogens from succinate to UQ to form UQH2. 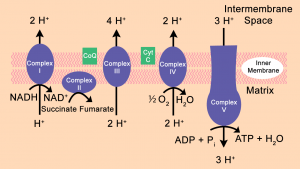 Components of the respiratory chain

Complex III: (Ubiquinoel: ferricytochrome C oxidoreductase.) is formed of Cytochrome,  One fes center, and  Cytochrome C1. It transfers electrons from UQ-H2 to cytochrome C with the release of two protons (2H+).

Complex IV: (ferrocytochrome C: oxygen oxidoreductase). It is formed of Two cytochromes (a &a3), and Two atoms of copper. It transfers electrons from cytochrome C to oxygen which then combines with the two H+ to form H₂O.

Cytochromes, each contain a heme group made of a porphyrin ring containing an atom of iron. the heme groups of Hb, the cytochrome iron atom is reversibly converted from its Fe+₂ to Fe+3  as a normal part of its function as a reversible carrier of electrons.

It is formed of two subunits Fo & F1. The F0 subunit acts as a gate or channel for protons and F1 subunits for the synthesis of ATP. Complexes I, III, and IV act as proton pumps. F1 subunit of ATP synthase protrudes into the mitochondrial matrix, while FO presents in the inner mitochondrial membrane.

The respiratory chain is controlled by the levels of ADP and Pi as well as by the availability of ADP/ATP transporter.

Inhibitors of the respiratory chain

A) Inhibitors of the respiratory chain proper

They inhibit the respiratory chain at four sites:

B) Inhibitors of oxidative phosphorylation

They dissociate oxidation in the respiratory chain from phosphorylation. As a result, oxidation becomes unlimited since it is not controlled by the concentration of ADP or Pi. They include 2,4 dinitrophenol, dinitrocresol, pentachlorophenol, thyroxine, Ca₂+, and m-chlorocarbonyl cyanide phenyl hydrazone (CCCP).

NADH is produced in the cytosol during glycolysis in the reaction catalyzed by glyceraldehydes -3- phosphate dehydrogenase. This NADH can not enter the respiratory chain in the mitochondria because the inner mitochondrial membrane is impermeable to it, therefore, reducing equivalents are transferred from extramitochondrial NADH to the mitochondria by one of two shuttles;