Brown motion is a group of random motion of fluid particles ( liquid or gas ) in all directions for short distances , Brown ( Scottish scientist ) discovered in 1827 that tiny pollen grains suspended in water move in a random motion .

Air ( gas ) molecules move in haphazard ( random ) motion in all directions with different velocities , During their motion they collide with each other and collide with the walls of the box , The reason for this is that the gas molecules are in a free motion and in continuous collision , so , they change their direction randomly .

Gas molecules move in random motion , During this motion , they collide with each other and collide with the walls of the container which contain them .

The compressibility of gases

The experiments performed to evaluate the thermal expansion of a gas are complicated , In order to make a full study of the behavior of a gas , The relations between three variables which are the volume , pressure and temperature , which are known as ( Gases laws ) . 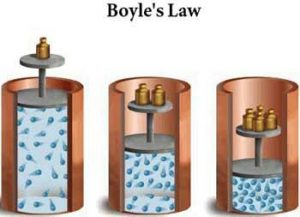 The relation between the volume and the pressure of a gas at constant temperature ( Boyle’s law ) .

Apparatus structure : It consists of a burette ( A ) connected by a rubber tube to a glass reservoir ( B ) containing a suitable amount of mercury ( A ) and ( B ) are mounted side by side onto a vertical stand with a ruler attached to a base where the stand is adjusted vertically .

The reservoir ( B ) is movable along the stand either upwards or downwards and can be fixed at any desired position , The two tubes contain a suitable amount of mercury .

The following factors should be constant to verify Boyle’s law : temperature , mass of the gas and atmospheric pressure , The burette ( A ) should be of uniform cross-sectional area so that the length of a trapped air column be a measure of a gas volume .

At constant temperature , the product of ( Vol ) and ( P ) of any given mass of gas is constant .

The volume of a fixed mass of a gas is inversely proportional to the pressure , at constant temperature .

Or at constant temperature , the product of a certain volume of any given mass of a gas and its pressure is constant .

If two gases are mixed with each other , we can calculate by using the following relation at constant temperature :

Where : P1 , P2 represent the pressure of the two gases before mixing .

If there is air bubble under water surface then it is raised at the surface of water at constant temperature .

Where h is the depth of bubble inside the liquid .

If a capillary tube containing a column of mercury of length ( h ) trapped a certain volume of air of length ( l ) .

When the tube is placed horizontally , then held vertically with the open end downwards .

When the tube is placed horizontally , then held vertically with the open end upwards .

Factors affecting the force of viscosity and Applications on the viscosity

Steady flow , Turbulent flow and Applications on the continuity equation