Modern tactical aircraft incorporate digital avionics systems with federated, centralized or distributed avionics architectures that share data via interconnecting data buses, The design of the digital avionics architecture has an impact on the combat survivability of the aircraft, Survivability in combat is defined as ‘the capability of the aircraft to avoid and/or withstand a man-made hostile environment.

Survivability is made up of two elements, susceptibility, the inability of the aircraft to avoid being damaged by various elements of the man-made hostile environment, and vulnerability, the ability of the aircraft to withstand the damage caused by the hostile environment, so, a tactical aircraft should be designed to avoid being hit and to survive if hit, This thesis explores the survivability advantages and disadvantages inherent in the design of digital avionics system architectures.

INS avionic system is a long-range navigational aid, it stands for Inertial Navigation System, It offers aircraft velocity (3D) and position fix (3D), INS is based on DR, what makes this technology quite amazing is that it is a self-contained system, so, no ground stations are required for operation. 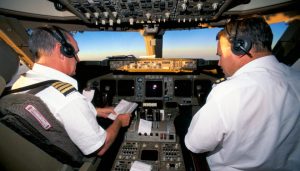 INS avionic system is a self-contained airborne system that does not need any outside NAV source, It displays in real-time the Aircraft velocity and position, It operates at all the altitudes, Sometimes GPS is used as an aid to INS in order to correct or attenuate errors, there are two types of INS in the Aircraft which are Stable-Platform INS or Gimballed INS and Strap Down INS.

Strap Down INS has no moving parts, so, the accelerometers are solidly connected to the airframe and gyroscopes are well aligned with the aircraft X-Y-Z coordinate system, It contains three laser gyroscopes viz. GROLL (Gx), GPITCH (Gy), GYAW (Gz), Strap Down INS is mechanically simple to realize, Laser gyros are more robust than traditional ones.

Stable-Platform INS gets aligned with the earth coordinate system despite aircraft angular motion, accelerometers and gyros are protected from malfunctioning due to severe maneuvers since they are not directly connected to the airframe.

NAV accuracy is highly dependant on the A/C maneuver, given that the accelerometers and gyros are directly connected to the airframe, Strap-Down INS demands more computations as first need to convert acceleration from Aircraft coordinates to the earth coordinates then perform DR to get the velocity and position.

VOR avionic system is a short-range navigational aid, it stands for VHF Omnidirectional Range, VOR provides Aircraft radial with respect to a ground station, the VOR system informs us of the aircraft location only as an entity seen by the ground VOR transmitter, If you want to know where the aircraft is located, tune VOR receiver to at least two VOR ground stations and obtain the 2D position fix.

Applications of VOR such as V-Airway: Used to assign highways in the sky, Track intercept: To be able to get back to the track due to crosswind, Simply fly toward the needle of the VOR display known as the course deviation indicator to ensure that the aircraft is going in the direction of the VOR ground station.

Disadvantages of the VOR system

It is limited to LOS due to VHF band operation, Error is approx. about +/- 2 Degree, VOR signals are either reflected or blocked or distorted due to buildings, Mountains, Fences, power lines, etc, At higher altitude interference may occur between two ground stations operated at the same frequency, VOR does not provide the aircraft heading, it only points to the ground station, Though GPS is taking place of VOR, VOR is still in use as a back up navigational aid system in case of satellite link failure.

DME avionic system stands for Distance Measuring Equipment, It is a navigational aid, It is rarely affected by precipitation static and thunderstorms, DME instrument provides distance between Aircraft and Ground station, we need separation between the Aircraft and the DME station measured overground.