GNSS is the general term describing any satellite constellation that offers positioning, navigation, and timing (PNT) services on the global or regional basis, While GPS is the most prevalent GNSS, Global navigation satellite system is used in research, such as climate change and ionospheric studies, Wireless networking, Photographic geocoding, Mobile satellite communications, Precise time reference and Military precision-guided munitions.

Global Navigation Satellite Systems include constellations of Earth-orbiting satellites that broadcast their locations in space and time, of networks of ground control stations, and of receivers that calculate ground positions, GNSS offers enhanced accuracy & integrity monitoring usable for civil navigation.

GNSS is the type of satellite navigation that offers global coverage, The global coverage can be achieved through the satellite constellation of 20 to 30 Medium Earth Orbit (MEO) Satellites, Each satellite would be placed between several orbital planes. 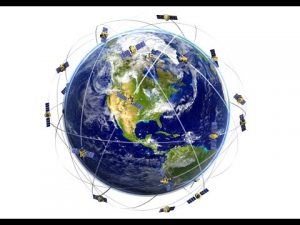 The satellite navigation or satnav system is the system that offers autonomous geo-spatial positioning, It helps small electronic receivers to determine their location (longitude, latitude, and altitude/elevation) to high precision using time signals transmitted along a line of sight by radio from the satellites.

GNSS is used to pinpoint the geographic location of the user’s receiver anywhere in the world, It has a high accuracy, It can function without interruption, It has the capacity to provide a threshold of confidence & in the event of an anomaly in the positioning data, an alarm.

The performance can be improved by regional satellite-based augmentation systems (SBAS), such as the European Geostationary Navigation Overlay Service (EGNOS), EGNOS improves the accuracy and reliability of GPS information by correcting signal measurement errors and by providing the information about the integrity of its signals.

Global Navigation Satellite Systems use the version of triangulation to locate the user, through calculations involving the information from a number of satellites, Each satellite transmits coded signals at precise intervals, The receiver converts the signal information into the position, velocity, and time estimates.

By using this information, any receiver on or near the earth’s surface can calculate the exact position of the transmitting satellite and the distance between it and the receiver, Coordinating the current signal data from four or more satellites enables the receiver to determine its position.

Satellite navigation improves the traffic flow, vehicle efficiency, guides users, and it helps track parcels and shipments by providing added value logistic solutions, It can facilitate the civil protection operations in harsh environments, It can speed up the rescue operations and it offer critical tools to coastguard and border control authorities.

The satellite positioning has become an essential service, Just think what would happen if GNSS signals were suddenly switched off, Truck and taxi drivers, ship and aircraft crews and millions of people around the world would suddenly be lost, financial and communication activities.

Satellite navigation can be used for providing position, navigation or for tracking the position of something fitted with the receiver (satellite tracking), The signals enable the electronic receiver to calculate the current local time to high precision, which allows time synchronization, Satellite navigation operate on any telephonic or internet reception, though these technologies can enhance the usefulness of the positioning information generated.

Global Navigation Satellite Systems will allow a GNSS user to utilize one instrument to receive signals from multiple systems of satellites, This will offer additional data in urban & mountainous regions, it offers greater accuracy in timing or position measurements, GNSS is a formidable instrument for time-stamping financial transactions, for conducting scientific research in meteorology, troposphere and geodesy.

The initial motivation for the satellite system was for the military applications, but it has now progressed to more extensive civil applications such as the disaster warning and emergency response, Land transportation, Mapping & surveying, Monitoring of the environment, Natural resources management, GNSS is used to control the computer networks, air traffic, power grids and more.