AI has made scientific research and exploration much more efficient, new missions are turbo-charged by AI as we voyage to comets, moons, and planets and explore the possibilities of mining asteroids, AI already plays a vital role in contemporary space exploration, the complexity of missions will continue to increase, and with it the demands placed on maintenance systems, artificially intelligence space probes, and mobile reconnaissance units.

AI is defined as the ability of machines to adapt their behavior to their surroundings, Artificial intelligence focuses on human-like intelligence, AI involves machines, programs & computers that can think, learn and make decisions on their own, This form of intelligence is integrated into our everyday lives from music services that recommend new music based on our interests to new self-driving cars.

AI and Machine learning can be used to usher a new era of space exploration, AI helps double productivity, It has already played a significant role in research into our planet, the solar system, and the universe, As computer systems and software have developed, so have AI’s potential use cases. 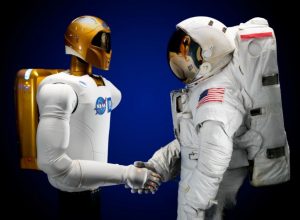 We will send spacecraft further into space than ever before, Due to this distance, they are not always within range to communicate information back to Earth, So, the spacecraft will need to be smart enough to learn and decide when and how to return the data that it has collected, the spacecraft will need to make decisions on its own in new environments (like new forces of gravity, different temperature ranges and unknown dust or asteroid encounters).

Applications of Artificial intelligence in space

Self-driving units, such as the Mars Explorer, have achieved major successes with important limitation, they are restricted to relatively smooth ground, The use of insect-like robots could be considered as an alternative, From a relatively large number of different projects, space exploration contributes to the development of self-driving vehicles on earth, while the development of self-driving vehicles is the driving force between research on the moon, Mars, and Venus.

Space probes depend on artificial intelligence when investigating such distant targets, Their missions are not limited to navigation and the proper use of many measuring instruments, The perfect functioning and interaction of the various technical components require continuous monitoring, AI helps human ground controllers in relation to routine tasks.

Artificial intelligence is used in many different sectors of the space industry, The rovers are currently roaming the surface of Mars, these robots must make some decisions without commands from mission control, The NASA Curiosity rover can image its surroundings to plan a path to a particular feature (such as a rock) up to 50 meters away, while avoiding large obstacles along the way.

AI supports the detection feature for planetary exploration, The geographical features of the surface of the planet tell us about its geological makeup and its historical significance, AI can send back images to earth, This can constitute a large volume of redundant data, AI can analyze features and classify images in order of significance, following which it can decide the best next action.

There are certain Mars rovers that are AI configured and navigate on their own, Mission controllers on Earth can only send and receive data or commands with the proper antennas during their allotted time (which may only be ten minutes per day due to all of the other space missions that require these antennas for communications too), To make their own decisions, the rovers use a driving system that uses AI to detect obstacles that it can avoid and determine the best route for travel.

The capsules were designed to bring astronauts and supplies to the International Space Station, future astronauts will spend less time training to use the vehicles they flying and more time on being able to notice if the vehicle is not doing what it is supposed to do, the astronauts could work with the ground crew to fix the problem and take control manually.

Automation, Machine Learning & AL can leave their indelible imprint on multiple and diverse fields in space, such as image analytics, workflow management, construction, autonomous vehicles, agriculture and the future of communication systems, Artificial intelligence & Machine Learning solutions are being increasingly researched and implemented in the space sector for a space age of the future, whose mainstay would be advanced robotics and which might resemble a robotic inter-galactic adventure.

Applications of AI are being extensively researched in the domain of satellite operations, especially in supporting the operational mechanism of huge satellite constellations, which includes many facets such as relative positioning & communication, Artificial Intelligence creates legal-ethical-commercial impact across all user segments bringing in productivity gains, cost and resource efficiencies to businesses.

The focus is also on managing complex constellations to reduce the workload of on-ground stations, With complete automation, the need for human intervention would be reduced, saving a lot of time, effort and money, For this purpose, automated collision avoidance maneuvers need to be developed, Deep Learning has its set of utilities in space, no matter however nascent in scope, Deep Learning can be applied in automatic landing, intelligent decision making and fully automated systems.

Space agencies are equally enthusiastic to develop AI capabilities and use them in space programs, NASA is researching to make communication networks more efficient and distortion free by using an AI-based cognitive radio that would increase reliability and minimize noise distortion, NASA also plans to design fully automated launchers and rovers for future missions.

Spacecraft autonomy has been primarily a collection of logic-based algorithms designed to respond to a set of circumstances that can be defined (or at least bounded) a priori, This type of artificial intelligence (AI) has worked well when the inputs to the algorithms fall within the pre-defined mission scope, allowing the pre-built logic statements to generate the appropriate response ahead of time.

The Earth Observer 1 (EO-1) satellite is launched in the early 2000s, its onboard AI systems helped optimize analysis and response to natural occurrences, like floods and volcanic eruptions, Artificial intelligence was able to tell EO-1 to start capturing images before the ground crew was even aware that the occurrence had taken place.

Sky Image Cataloging & Analysis Tool (SKICAT) has assisted with the classification of objects discovered during the second Palomar Sky Survey, classifying thousands of more objects caught in low resolution than a human would be able to, AI systems have helped astronomers to identify 56 new possible gravitational lenses that play a crucial role in connection with research into dark matter.

Machine learning algorithms have been used in health monitoring of spacecraft, autonomous navigation, intelligent control systems and intelligent object detection for path navigation, When sending astronauts on longer missions and to further destinations in the solar system, AI will also be used to help humans respond to unexpected events.

Software that is able to respond to medical emergencies or broken equipment will better prepare the astronauts for these future missions, if a medical procedure needs to take place on board a spaceship of astronauts that is far from Earth, live communication with a doctor or surgeon on Earth will not be possible, Instead, the spaceship’s machines will be capable of learning and reasoning to assist in these scenarios.

Advantages of Artificial intelligence in space

AI can deal with vast amounts of data and find correlations, Artificial intelligence is used for trajectory and payload optimization, the next generation of AIs will control vehicles, autonomously assist with study selection, and dynamically schedule and perform scientific tasks, AI participates by driving progress in vision-based technologies such as autonomous satellite servicing, lunar landing, and research in vision-based AI and machine learning.

New spacecraft will be capable of being more independent, self-reliant and autonomous, Because scientists can’t predict when or where discoveries will be made in space, AI will be a helpful tool to help space technology notice important findings & send important information back to us on Earth, Artificial intelligence will reduce costs by lowering the needed ground operations conducted by people, which means that it could lower risks for human workers.

Artificial intelligence will continue to be a valuable tool for combing through large amounts of information, it is considered as a way to find life on new planets, AI networks can find patterns that humans may not be able to spot themselves to select planets that have the right conditions to support life for us to explore, space contains countless stars & planets that can be quickly analyzed by computers than humans.

Spacecraft’s need to constantly communicate with Earth-based stations to operate, but the new age of autonomous spacecrafts would be able to operate autonomously, This will boost exploration efforts and also reduce the cost of space missions, It has been identified that autonomous navigation and software up-gradation is the key requirements before going completely autonomous.

AI can calculate the trajectories of the planets, It can enhance and improve the autonomous capability of space probes and optimize planetary & celestial tracking system, Smart data transmission software aboard the rover removes the margin of human error which can otherwise lead to fatal consequences, AI has proven to be a powerful tool for sifting and filtering through a virtual ocean of data and its predictive analytics methods would soon be used by many space agencies.