Isoenzymes are alternative forms of the same enzyme activity that exist in different proportions in different tissues, they are known as isozymes, they differ in amino acid composition and sequence and multimeric quaternary structure; but they have similar structures, Their expression in a given tissue is a function of the regulation of the gene for the respective subunits, Isoenzymes are identified in the clinical laboratory by electrophoresis.

They are oligomeric enzymes, having the following characters:

Example: Lactic acid dehydrogenase is a tetrameric enzyme, formed of 4 subunits of two types H and M. Only the tetrameric molecule is active. H and M subunits combined to form 5 isoenzymes as follows:

As it was mentioned, isoenzymes of the same enzyme are different in a location in tissues and in their electrophoretic mobility. So, in the case of diseases, we can diagnose the exact site of their release in case of the elevation of the level of the enzyme in the blood by electrophoresis. 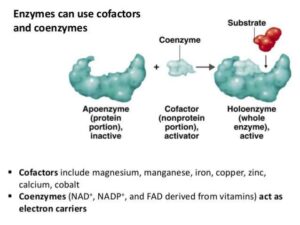 Enzymes may be simple proteins or complex enzymes, containing a non-protein part, called the prosthetic group. The coenzyme is essential for the biological activity of the enzyme. A coenzyme is a low molecular weight organic substance, without which the enzyme cannot exhibit any reaction.

One molecule of the coenzyme is able to convert a large number of substrate molecules with the help of the enzyme. They combine loosely with the enzyme molecules and so, the coenzyme can be separated easily by dialysis. Coenzymes are considered as group carriers and they can be classified:

1. According to the functional basis into:

a. Coenzymes for transfer of H. They are called hydrogen carriers. e.g:

b. Coenzymes for group transfer other than H. e.g.

A. Vitamin coenzymes: coenzyme derivatives of some water-soluble vitamins.

The classification of enzymes is made by the international union of Biochemistry (IUB). There are six major classes: Oxidoreductases, Transferases, Hydrolases, Lyases, Isomerases, and Ligases.

The oxidation process occurs by 3 means:

Oxidoreductases are classified into oxidases, dehydrogenases, hydroperoxidases, and oxygenases.

A) Oxidases: they are enzymes that catalyze the removal of hydrogen or electrons from the substrate but use only oxygen as a hydrogen acceptor and form water or hydrogen peroxide as a reaction product.

B) Hydroperoxidase: enzymes utilizing H2O2 as a substrate.

H2O2 is injurious to the cells. It is catalyzed by two heme-containing enzymes, catalase, and peroxidases.

Catalase: is present in all cells and tissues, especially abundant in liver, kidney, and erythrocytes.

In the catalase reaction, one molecule of H2O2 act as a substrate, and the other molecule act as a hydrogen donor:

2. Peroxidase present in RBCs, milk, and leucocytes. Peroxidase uses H2O2 as a substrate and an organic substrate as a hydrogen donor. e.g. ascorbic acid, glutathione.

C) Dehydrogenases: These remove hydrogen from one substrate to a hydrogen carrier. They can not use oxygen as a hydrogen acceptor.

Dehydrogenases are classified according to the type of hydrogen carrier into:

a) Dehydrogenases depend on nicotinamide coenzymes (NAD, NADP)

b) Dehydrogenases depend on riboflavin coenzymes (FAD and FMN).

d) Oxygenases: They catalyze the direct incorporation of oxygen into the substrate. They are divided into:

These are enzymes which catalyze the transfer of functional groups (G) other than hydrogen between a pair of substrates S and S’.

These enzymes act by splitting (cleavage) of a certain bond by adding water. They are subdivided according to type of bond into Glycosidases, Esterases, endopeptidases, and exopeptidases.

These enzymes catalyze the addition or removal of groups e.g. H2O, NH3, or CO2, Without hydrolysis, oxidation or reduction. e.g. Dehydratases (or hydratases): they catalyze removal or addition of water to or from the substrate. e.g.

They catalyze the interconversion of two isomers. They include the following: