Somatic cells: All body cells (except reproductive cells). Such as:

Reproductive cells Such as:

Chemical structure of chromosomes: Each chromatid consists of:

DNA is the nucleic acid that carries the genetic traits of the living organism.

The cell division allows the living cell to divide into two cells or more, to aim the growth or reproduction.

There are two types of cell division. 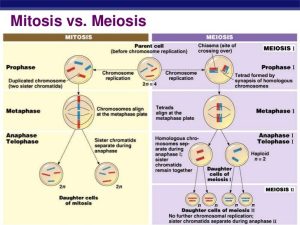 Site of occurrence: It occurs in somatic cells only such as:

Some cells in the human body are not divided at all:

It plays an important role in:

Before starting mitosis, the cell passes through a phase called interphase.

Interphase has an important role before starting mitosis as interphase prepares the cell for division by:

Interphase is the phase which is occurred before starting the cell division process, at which the cell prepares for division by the occurrence of some important biological processes and duplicating the amount of the genetic material (DNA).

In this phase: the Chromatin reticulum condenses (intensifies), then appears in the form of long, thin, and double-strings chromosomes. At the end of this phase: Nucleolus and nuclear membrane disappear. A network of filamentous fibers called “spindle fibers” is formed at the centrosomes extending between the two poles of the cell. Each chromosome is connected with one of the spindle fibers by the centromere.

In this phase: The chromosomes which are connected with the spindle fibers are arranged at the cell equator.

In this phase: The centromere of each chromosome splits lengthwise into two halves, so the chromatids separate from each other, The spindle fibers begin to shrink and two identical groups of chromosomes (each contains single chromatids) are formed, Each group of chromosomes migrates towards one of the cell’s poles.

Shrinking of spindle fibers during anaphase of mitosis division to form two identical groups of chromosomes at each pole of the cell.

In this phase: The spindle fibers disappear. A nuclear membrane is formed around the chromosomes at each of the cell’s poles leading to the formation of two new nuclei. A nucleolus is formed at each pole of the cell. The chromosomes inside each nucleus convert into a chromatin reticulum again. At the end of this phase: the cell divides into two new cells, the nucleus of each of them contains a complete number of chromosomes (2N) of the parent cell.

Some somatic cells such as liver cells are not divided in normal conditions but they retain the ability to divide under certain circumstances, For example, if the liver gets injured or a part of it is cut, the remaining cells undergo many mitotic divisions to compensate the missing part, this is the scientific basis used in liver transplantation.

The liver transplantation process is performed to replace the infected patient’s liver with a part of a healthy donor’s liver, as time passes, the liver of each of them is completed due to the occurrence of mitosis divisions.