Wireless bomb-disposal robots are called explosive ordnance disposal (EOD), They are one of many tools a technician might use to disarm dangerous weapons, the human cost of losing the bomb technician in the field, training the bomb-disposal officer is more expensive than buying an EOD robot, So, we must maintain a safe distance from a potential bomb and only in extreme situations will the technicians enter the blast range and put their hands on the device themselves.

Bomb disposal robots operate as a remote presence for the bomb disposal experts, or “bomb doctors”, So, They can closely examine devices, without putting themselves or others in danger, Once the device has been examined, the robot can render the bomb inert, It is not just bombs that the robots disable, but also any type of devices that could detonate, This can include anything from landmines to unexploded munitions.

The first bomb disposal robot created was the Wheelbarrow Mark 1, In 1972, Its idea is using the chassis of an electrically-powered wheelbarrow to tow suspect devices, such as car bombs, so they could be safely detonated without harming anyone, but the prototype Wheelbarrow proved difficult to manoeuver.

The aim of modern bomb disposal operations is to render the explosive ordnance device inert without causing it to detonate, Bomb disposal robots achieve this by firing a high-pressure jet of water at wires on the device, The explosive device requires a power supply to detonate, disrupting this wire means the circuit is broken and thus rendered inert, if not safe. 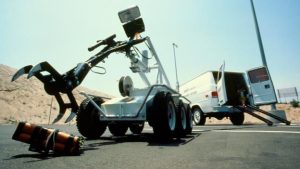 Some devices have secondary systems that can cause the device to explode if it is tampered with, This is why bomb disposal is best carried out by a robot, Bomb disposal robots are controlled by operators from a safe distance, They can see what the robot sees, through a series of cameras on the robot’s outer casing, with the view transmitted to the operators’ monitors.

Most bomb disposal team can carry different tools, Bomb disposal robot will bypass various obstacles that would otherwise impede its progress, such as using wire cutters to cut wire fences, These robots vary in size, such as the stripped-down backpack sized robots that can be carried on the soldier’s back and thrown into buildings, the size of a ride-on lawnmower, armed with x-ray devices and explosives detectors.

When the technology of bomb disposal robots improves, Many lives will be saved, The advancement in robotics and remote control systems has meant that bomb disposal robots will become adaptable to their environments in the future, Robots have been used to defuse bombs, They go where humans fear to tread, bomb disposal is one of the most hazardous, where the risk of death lurks with every move.

Bomb disposal robots can carry out complex series of actions automatically, but they can’t perform contextual decision-making or operate by themselves, they are more accurately as drones, unmanned vehicles because they are remotely controlled by a human operator, Remotely operated bomb disposal robots have saved innumerable lives, The bomb disposal squad have very little time in checking out the bomb and defusing it.

Robots are designed to carry out tasks humans either don’t want to or can’t do, Disarming and disposing of bombs are one of the most potentially hazardous professional activities, Bomb disposal is one of the first practical applications for robotics, bomb disposal robots have undergone a dramatic transformation, from the first Wheelbarrow units controlled with series of ropes to modern units using virtual reality (VR) & advanced sensory feedback.

Robots are more precise & reliable, the biggest difference between modern bomb disposal units and early models is the method of user control, Gone are the days of using ropes to manipulate the robot, now everything is remotely controlled with VR, the 3D monitor has been replaced by a VR headset and a simple pair of controllers purchasable with consumer models.

Bomb disposal experts won’t have to put their lives at stake every time they have to disarm an explosive, They save lives by keeping people away from any explosions, Instead of a bomb technician dying if the defusing goes wrong, the only thing affected by the blast is the robot, Bomb disposal robots can clear out large areas such as war zones that have lots of explosives & land mines, This is done from a long distance away which minimizes the risk of anyone being injured.

Bomb disposal robot helps avoid the risk of deadly scenarios to life, if the robot can’t reach the item for disruption, it can be used to get information, and events recorded by the robot’s camera can offer evidence for further analysis, Bomb disposal robots can be easily transported, they are fast & mobile, they keep personnel, assets & civilians out of danger.

The main goal of the robot is to offer safety to the bomb disposal squad by providing an extra line of defense, The robot offers remote monitoring and controlling applications for analysis of a suspicious packet (or bomb), It allows the user to manipulate the packet using the robotic arm, It presents visual feedback from the site of the packet, and it offers a very user-friendly control application.

The robot consists of base, robotic arm, video feedback base consists of four DC motors and one stepper motor, one DC motor attached to every wheel on the robotic base and stepper motor for movement of arm shoulder, Robotic arm consists of two DC motors, which are used for the elbow and gripper movements, The control application controls the behavior of the base and the robotic arm, by sending control signals to the serial port using the Atmel 89C51 microcontroller, which is the brain of the robot.

Wireless bomb disposal robot can be altered to suit the needs of the user, It is fast & robust, It can handle different loads, It can be controlled remotely, It has video feedback, It has a 360-degree of freedom robotic arm, The compact design is required where the situation demands the robot to reach small places and results in a faster motion & increases the accuracy & efficiency.

Cobham tEODor is one of the most widely used bomb-disposal robots today, The base robot is a twin-track vehicle with a host of military applications, but the standard tEODor is a bomb-disposal specialist, The robot is equipped with an arm-like manipulator, sensors & a camera on a boom for enabling the operator to remotely disarm ordnance and improvised explosive devices (IEDs).

The technician will sit at a safe distance with the control station, there is a laptop-like device which consists of a monitor showing the robot’s point of view as well as its surroundings, A joystick & control panel can manipulate the arm and maneuver the tracks.

Dragon Runner 20 robot is a Small Unmanned Ground Vehicle (SUGV), It is a highly specialized system that can see around corners and into tight spaces, and the dexterity to go where personnel can’t – whether it’s under a car at a security checkpoint, or deep inside a sewer or drainpipe, Spartacus robot comes in a number of variants ranging in weight from 5,000lbs to 12,500lbs.