CBCT aids in the early detection of many life-threatening diseases, cancers, and oral issues, children benefit from CBCT as opposed to a traditional CT scan, The CBCT scan is very quick so that children are not forced to sit still for an extended amount of time, The typical CBCT scan takes less than one minute to complete.

What is Cone beam ct (CBCT)?

Cone Beam Computed Tomography (CBCT) is a variation of traditional computed tomography, Unlike a CT scanner, it uses an X-ray tube and detector panel which rotates around the patient capturing data in cone-shaped X-ray beam instead of slices as captured by Computed Tomography (CT), Images are reconstructed using algorithms to generate three-dimensional images at high resolution.

All the CBCT scanners use an x-ray source and detector mounted on a rotating gantry, During the rotation of the gantry, the x-ray source produces divergent cone-shaped radiation, while the receptor records the residual x-rays after they are attenuated by patient tissues.

The X-ray source and detector move through an arc of 180 to 360 degrees to produce multiple planar projection images, These images constitute raw primary data, This data are reconstructed by an algorithm running in the computer to generate cross-sectional images. Sensors such as image sensors (PSP- Photo Stimulable Phosphorus Plates), CCD sensors and FPD (Flat Panel Detector) are used for X-ray detection. 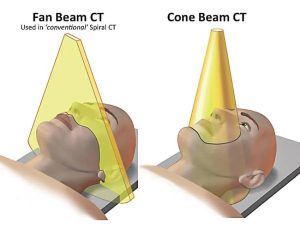 In Computed tomography (CT), the images of selected layers are recorded sharply while images of other layers are recorded unsharply, Tomography offers the synchronized movement of any two of the three subjects viz. x-ray tube, film, and patient while the third subject remains stationary, The most commonly used method is the one in which patient remains stationary while X-ray tube and film (or detector) move in co-ordination.

The CBCT technique is economical, comfortable, and safe to use, It supports interactive display modes and multiplanar reformatting, CBCT imaging offers insight into treatment planning which is unachievable with other methods, This allows clinicians to present more predictable patient care.

Cone beam ct is convenient and painless for patients, It aids in the diagnostics, development of treatment plans, and procedures, It can assess risk, It offers a better analyze position and orientation of surrounding structures (sinuses, roots, and nerves), It is cost-effective, and it is safe for patients of all ages.

Cone beam ct emits radiation, Streaking and motion artifacts are possible. Certain artifacts can not be resolved by the CBCT technique and it appears in the image, Cone Beam Computed Tomography offers poor contrast resolution, Hence soft tissues can not be viewed, Noise appears in the image generated by the CBCT technique, and cone beam ct is not required to be used where 2D imaging suffices.

Presurgical planning is based on data acquired from CT or MRI, CT data can be obtained from two modalities, cone beam CT and fan-beam CT (medical grade CT), Data output from these devices will be in “DICOM format” (Digital Imaging and Communication in Medicine).

CBCT improves the image quality and mitigates the limitations, 3D imaging reduces the length of time patients are exposed to radiation. The price to purchase a CBCT machine is much cheaper. The brand new fan-beam CT scanner can cost as much as $2.5 – $3 million, 5 times more than the brand new cone-beam CT.

CBCT produces a worse contrast resolution compared to fan-beam CT, making it harder to view soft tissues, The contrast resolution of CBCT is limited by high scatter radiation during image acquisition, the divergence of the x-ray beam, and built-in flat panel detector-related artifacts, If the objective of the examination is soft tissue only, using the CBCT would not be a satisfactory solution.

During the scan, CBCT takes 150-600 distinct sequential planar images, which are reconstructed using algorithms to produce 3-dimensional images, The 3D images offered by CBCT can be viewed in either axial, coronal, or sagittal planes, these images are in the DICOM (Digital Imaging and Communications in Medicine) data format, enabling dentists to telecommunicate the imaging information.

Dental CBCT offers 3D information rather than 2D, so, this technology has become a game-changer to the dental industry, allowing dentists to come up with faster and more accurate diagnoses, treatment plans, and evaluation, with traditional fan-beam CT, only one jaw can be visualized at a time, However, CBCT can visualize both jaws at the same time.

Most CBCT systems allow dentists to convert the CBCT image into other formats that are familiar to dental professionals, such as panoramic or cephalometric, CBCT is easy to use, and it improves patient satisfaction, patients will have a much better experience when coming to your office.

The cone beam computed tomography (CBCT) devices, changed the way oral and maxillofacial radiology is practiced, CBCT was embraced into the dental settings very rapidly due to its compact size, low cost, and low ionizing radiation exposure when compared to medical computed tomography, Alike medical CT, 3-dimensional evaluation of the maxillofacial region with minimal distortion is offered by the CBCT.

Applications of Artificial intelligence in the medical field & healthcare