Biological computers are designed to be used for the medical applications , They are special types of microcomputers , They are the implantable devices that are used for the tasks such as monitoring the body’s activities or inducing therapeutic effects , all at the molecular or cellular level , Many applications of biological & biomedical problem solving goes back to very beginnings of computer science , automata theory & mathematical biology .

The biological computers are a type of the biosensors which have emerged as the interdisciplinary field that draws together molecular biology , chemistry , computer science & mathematics , The structure of the biological molecules can enable DNA computers to outperform from their electronic counterparts in the future .

The computer is the electronic device that is used to store , manipulate & communicate the information , perform complex calculations , or control or regulate the other devices or machines , It can receive the information & process it in accordance with variable procedural instruction .

Bio-computing is one of the new fields in research which deals with the computer science & biology , This enables the researcher to build an array of data accordingly , The development of bio-computers has been made possible by the expanding new science of nano-biotechnology , The term nano-biotechnology can be defined in multiple ways . 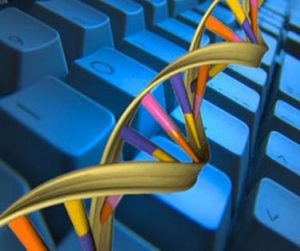 Nano-biotechnology means any type of technology which uses both nano-scale materials such as the materials having characteristic dimensions of 1-100 nanometers , as well as biologically based materials , A more restrictive definition views nano-biotechnology more specifically as the design & engineering of the proteins that can be assembled into the functional , larger structures .

Nano-biotechnology implementation allows the scientists to engineer bio-molecular systems specifically so that they interact in the fashion that can ultimately result in the computational functionality of the computer .

Implantable biological computer can be used in many medical applications where the intercellular evaluation & the treatment are needed or required , It is useful in monitoring the intercellular activity including the mutation of genes .

The doctor can focus on or find & treat only damaged or diseased cells , Selective cell treatment is made possible , Bio-computers made of RNA strands might serve as brains for producing biofuels from the cells , or to control smart drugs that medicate only under certain conditions .

The biological computer is a massively parallel machine where each processor consists of a single biological macromolecule , The part of the system can be made of the biological & the other using current or new hardware that may become available , This would give us the combined benefit of both systems , It is a good idea to look to real biological systems for the solutions to particular problems .

The DNA computer was used to find the only correct answer from over a million possible solutions to the computational problem , Before one can turn the living organisms into the computational systems , Biocomputing researchers need the way to create & connect multiple circuits switches , clocks and so forth within a single cell .

When you use pre-programmed medical knowledge , The computer makes its diagnosis based on the detected RNA levels , In response to the cancer diagnosis , the output unit of the computer is able to initiate the controlled release of the single stranded DNA molecule which is known to interfere with the cancer cell’s activities , causing it to self-destruct .

This can be a type of biosensor which has the ability to detect or target specific types of cells in the human body , It can carry out target-specific medicinal operations which could deliver the medical procedures or the remedies according to the doctor’s instructions .

Living organisms carry out complex physical processes under the direction of digital information , DNA was recognized as the most important molecule of living nature , The ability to store billions of data is an important feature of the DNA and hence to the biological computing .

The human genome project is an effort at an international level , It is a research directed at creating a map of human DNA , Molecular genetics is the best way to understand this project , Geneticists have used a technique called linkage analysis to determine how frequently different forms of two variable traits are inherited together i.e. not separated by recombination during meiosis .

While DNA can be measured in nano grams , the silicon chip is far behind when it comes to storage capacity , A single gram of DNA can store much information , CPU is replaced by DNA , The cell is considered as a computational system & its program resides in DNA and its state in the distribution of chemical compounds & electrical charges .

Many problems such as many-body interaction calculations & statistical mechanics of the biological processes are due to benefit from the increasing access to the new generation of the supercomputers , The diversity & complexity of the computer applications in the biology & medicine .

Biological computer performs millions of operations at the same time , It is good for parallel computing , It has the ability to use large amounts of working memory , 1 gram of DNA can hold 1 x 1014 MB of data , Or 145 trillion CDs , 1 CD is 800 MB .

Biological computer is cheaper , It is lightweight , 1 lb of DNA has more computing power than all computers ever made , Low power used to keep in the original state , It has the ability to solve the hardest problems in a matter of weeks , Biological computer has readily available materials , It is clean & environmentally friendly .

DNA computers are known as the computational genes would be integrated into the genetic material already in the patients cells , Computational genes are similar to ordinary gene DNA markers , They will be programmed to react to a certain input with a certain output .

DNA is the biological molecule where it stores more genetic information , DNA is a favorite building block for molecular computations & biocomputers , DNA have been implemented in test tubes where well-designed species have been assembled & their emergent computational behavior was observed .

Sometimes there are errors in the pairing of DNA strands , Simple problems solved faster on electronic computers , The human assistance is required , Time consuming lab procedures , No universal method of data representation and DNA has a half-life .

The importance and uses of computer technology in pharmacy

Harmful health effects of the computer on the human body