NFC vs Bluetooth vs Wi-Fi advantages and disadvantages

NFC, Bluetooth, Wi-fi are the wireless data transfer technologies, Bluetooth is the most famous among them, It has become the standard for the wireless pairing of nearby devices and accessories, NFC is limited to the distance of (4 cm) while Bluetooth can reach over 30 feet and it is superior in this regard.

They share several features, They are forms the wireless communication between the devices over short distances, NFC and Wi-Fi are quite old but both have recently gained popularity after being incorporated by the large smartphone manufacturing companies such as Samsung, HTC & Sony.

NFC is the data transfer technique and it is the type of the wireless communication with short-range, The data can be transferred in the form of the beam by touching the two things together and the single wave or the beam helps transfer the data between two devices within the range of (4 cm).

NFC (Near field communication) consumes little power than Bluetooth technology, It helps to transfer the data at a faster rate, The devices connected using NFC must be close proximity to each other in the crowded locations to prevent the interference caused when the other devices are present and they are trying to communicate.

While Bluetooth may have trouble dealing with the interference when trying to send the signals between two devices when many devices are in close proximity, Bluetooth requires the users to manually set up the connections between the smartphones and it takes several seconds. 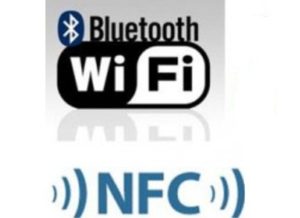 NFC vs Bluetooth vs Wi-Fi

NFC technology is easy to use, It connects automatically in the fraction of a second, so, it is faster, while the users should be close to each other to use NFC technology, NFC is faster and easier to set up than Bluetooth connection.

Bluetooth is the widely known wireless way of communication or the data transfer technology, It is the alternative technology of data cables, The users can transfer the data with the help of it.

There are many applications of Bluetooth technology as it is quite old, It is built into the number of devices such as the laptops, the mobile phones, in many medical & healthcare devices and you can do the wireless communication with the help of it.

Bluetooth technology helps to do the wireless communication between the laptops, the desktop computers, the printers, the keyboards & the mikes, It is widely used in the mobile phones as it helps them connect with many laptops and devices.

Bluetooth is used as the wireless remote controls of many video games, It is very easy to use, The companies can easily incorporate this technology into their devices as it is quite inexpensive and the Bluetooth versions are easily upgradeable.

Bluetooth offer the longer signal range for connecting during the data communication and transfers, NFC technology can connect two devices quickly, then it turns the signal over to Bluetooth, so, you can move further away without severing the connection.

But Bluetooth is limited in its transfer of data, It can not transfer the data between more than two devices, The data theft may occur because of the long distance for the data transfer, When it is installed, The viruses or the bugs might be downloaded with it.

Wi-Fi helps in managing or communicating the network without laying cables, It can reduce the cost of the cables and laying charges, You can run the network where you can not lay the cable network, Wi-Fi setup and configuration is easy than the cabling process, We can add many Wi-Fi clients without hassles and moving to the other location is also easy.

You can send and receive any amount of data in the air, It is very safe, It will not interfere with any network, you can use Wi-Fi network at the office or at home while moving within the signal range.

Adding Wi-Fi to the smaller devices has accelerated, and it is now possible to find the printers, the cameras, the scanners and many other popular devices with Wi-Fi in addition to the other connections, like USB.

But Wi-Fi network implementation is more costly than the wired network, You can find limitation to transfer the data rate, It can not send the huge data compared to the wired technology, Wi-Fi harms the human health as it generates some radiation, So, Wi-Fi devices or equipment should be stopped when they are not in use to reduce the radiation.

The importance and uses of Wi-Fi technology

The importance and uses of Bluetooth technology