Wireless Internet or wireless connection is a type of Internet access that makes use of the radio waves, Instead of using the wires to gain access to the web, You can make use of Wi-fi routers to distribute your wireless signal over certain areas such as your home or restaurant.

Wireless connection is widely used in cafes, airports, and other public buildings, The computers can make the wireless Internet if they have a wireless NIC, The wireless router provides the connection with the physical network, The computer needs to be within a range of the router to get access.

Wireless Internet uses radio signals to send the data across the networks, Wireless adapter converts the data into the radio signal and a wireless receiver decodes it to enable the computer to understand it.

You can access the internet even outside your normal work environment, The new users may easily be included in the wireless network, The cost to install the wireless network is cheaper than the wired network, Wireless Internet offers flexibility as the radio waves go through the walls, and it is easy to set up the network card wireless computers. 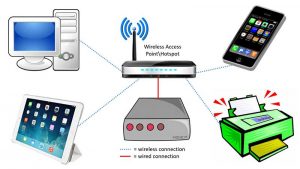 Wireless Internet offers cheap set-up costs, It is not tied down to a specific location, You can connect multiple devices without the need for extra hardware, It presents less disruption to the building due to no wires being installed.

Wireless connection can be hidden, It can be placed behind the screens of these networks, It is suited for the places or the sites that can be difficult to connect the wired network such as the old museum buildings, It is used by many houses users, and it enables the user to communicate while on the move.

Wireless connection prices are not high, The cables or the adapters are not needed to access the office networks, You can be networked without sitting at the dedicated computers, This can lead to new styles of working such as the home working or the direct access to corporate the data on the customer sites.

Wireless connection speeds are slower than ADSL, It is affected by the surroundings, You need direct line of sight to establish the internet connection, It is less secure, There is the risk of outsiders accessing your network unless the security protocols are enabled (eg WPA, WPA2).

Wireless connection can be intercepted by anyone within the router range, The access can be restricted to the specific MAC addresses, The transmissions are usually encrypted using a key that works with WPA (wi-fi protected access), and it is more vulnerable to the attack.

Wireless Internet is not as stable as wired networks and it can drop off, The interference can occur, It will lose the quality through the walls or the obstructions, It is more open to hacking, and it is slower than the wired networks.

The organs made by different companies may not be able to communicate with each other or you may need extra effort to overcome these problems, It can be solid but possible to suffer from radio interference from other devices and it can impair the performance.

Wireless connection has limited bandwidth, So, they can’t support Video Teleconferencing (VTC), It is limited in its expandability due to the lack of the available wireless spectrum for it to occupy, It can be slower and less efficient than the wired connection.

Wireless connection can have a security risk if it is not installed and maintained properly, It does not require any physical components to connect up to it such as the wires, a wireless adapter is only required to increase the accessibility of the network to potential hackers.

The wireless connection can be accessed by anyone easily, If it does not contain a password, It has an increased chance of jamming and interference due to external factors such as the fog and the dust, the storms, or when a flying object such as an aeroplane passes over the field.

What are the advantages and disadvantages of using the Internet?

Steps to protect your computer from Hackers and Predators