Aqua-Fi’ systems can use either LEDs or lasers, The LED option allows for short-distance communication with low power requirements but going with lasers extends the range and transmission rate, although the power demands are higher. Radio waves may travel badly through the water, and this makes it very difficult for divers or submarines to transmit information to the surface wireless. Two years ago, in 2018, the researchers used lasers to transmit HD video through the water. Their new experimental system, known as Aqua-Fi, is based on that technology.

Divers will benefit from a wireless system to connect them to the surface instantaneously. The system is called Aqua-Fi, It is Aquatic internet that can send data, It can use beams of light to connect to a surface computer, which can be linked to global communications satellites. Aqua-Fi allows divers to transmit footage from under the sea to the surface.

The internet is an essential communication tool, It can connect tens of billions of devices worldwide, and you can connect to the web from underwater. Wireless internet under the sea would allow divers to talk without hand signals and send live data to the surface. The researchers recorded a maximum data transfer speed of 2.11 megabytes per second and an average delay of 1.00 millisecond for a round trip.

The user (such as a diver) can send data (measurements, photos or videos) using the smartphone placed in the watertight container. the data is transmitted in the form of radio waves, going within a few meters of a small device mounted on the sub’s air tanks. A microcomputer in that device then converts the data into a series of ultra-rapid light pulses. Each pulse represents a 1 or a 0 in binary code. 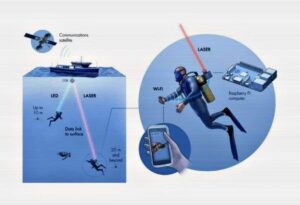 The Aqua-Fi prototype can use green LEDs or a 520-nanometer laser to send data from a small, simple computer to the light detector connected to another computer, The first computer can convert photos and videos into a series of 1s and 0s, which are translated into light beams turning on and off at very high speeds, The light detector senses this variation and turns it back into 1s and 0s, which the receiving computer converts back into the original footage.

Aqua-Fi can use radio waves to send data from the diver’s smartphone to the “gateway” device attached to their gear, Then, much like a booster that extends the WiFi range of a household internet router, this gateway can send the data via the light beam to the computer at the surface that is connected to the internet via satellite.

They are pulses of light that are subsequently sent to the surface, using a 520-nanometer integrated laser or a series of green LEDs. LEDs can send data at relatively short distances using little energy, while the laser can send them farther but consumes more energy. On reaching the surface, pulses of light are received by the photodetector placed under the keel of a ship, finally converted back into the original photos or videos from a connected computer, From there, files can be uploaded to the Internet via satellite.

The Aqua-Fi system is used to upload and download media files between two computers positioned a few feet apart in still waters, Aqua-Fi system is a relatively inexpensive and flexible way to connect underwater environments to the Internet, Aqua-Fi will be as widely used underwater as Wi-Fi is on the surface.

You can communicate underwater with radio, acoustic, and visible light signals, radio can only carry data over short distances, and acoustic signals support long distances, but with a very limited data rate, Visible light is able to travel far & carry lots of data, but narrow light beams require a clear line of sight between the transmitters & receivers.

It will not be available until the researchers overcome several obstacles, the link quality, and the transmission range should be improved with faster electronic components, The light beam should remain perfectly aligned with the receiver in moving waters, There is still a disadvantage which is the scattering of light by rapidly moving water, but this may be overcome with the use of a spherical receiver that collects light pulses from all directions.

The importance and uses of Wi-Fi technology

Importance of lasers in communication & advantages of fiber optics cables

What are the advantages and disadvantages of using the Internet?