LASER means Light Amplification by Stimulated Emission of Radiation , It can produce an intense , highly directional beam of light , The most popular cause of laser-induced tissue damage is the thermal in nature , The tissue proteins are denatured due to the temperature rise following absorption of the laser energy .

Human body is vulnerable to the output of certain lasers , The exposure to laser radiation can result in damage to the eye & the skin , The human eye is almost always more vulnerable to the injury than the human skin .

Laser hazards are addressed in specific standards for the general industry , The workers have a right to a safe workplace , The law requires the employers to provide their employees with safe and healthful workplaces .

Main purpose of laser safety standard is to prevent the laser related injuries , The safety protection against the lasers can be attained when the users correctly recognize the potential hazard of laser products and they correctly perform a specific procedure using safety functions of laser products . 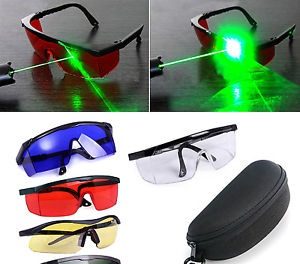 You should take safety measures for class 4 laser products , To prevent operation of the laser system by unauthorized users , the key control ( Key operated power switch ) should be managed by the Laser Safety Officer.

You have to post a warning sign at the entrance to the controlled area in which the laser product is installed to ensure that the workers and outsiders are informed about the dangers .

If the skin is exposed to the laser beam reflected on the marking target in the control area where the laser product is installed , It will cause the skin to burn , and the clothes may catch fire , During the laser operation , wear the flame-resistant clothes and protect the skin as much as possible .

You have to protect your eyes by protective goggles in the controlled area in which the laser product is installed , You have to wear protective eye goggles , regardless of whether normal use or maintenance , in case of accidental exposure to the laser emission .

The eye-wear must be selected for the specific type of laser , to block or attenuate in the appropriate wavelength range , The eye-wear absorbing 532 nm typically has an orange appearance (although one should never rely solely on the lens color when selecting laser eye protection ) , transmitting wavelengths larger than 550 nm .

Eye-wear is rated for the optical density (OD) , which is the base-10 logarithm of the attenuation factor by which the optical filter reduces beam power , Eye-wear with OD 3 will reduce the beam power in the specified wavelength range by a factor of 1000 .

The acrylic filter can be attached to the monitoring window on the equipment to block the laser beams , If the poisonous gas is generated during the laser marking on the target object , identify the substances produced by the gas and provide a local ventilation system .

You should appoint the safety officer who has a big knowledge and experience in handling the laser products to enforce safety management , Laser Safety Officer can manage the key for the key-operated power switch , He can check the protective equipment & its use and he can train the operators .

You must not put your eyes at the horizontal plane level where the beams are in case of reflected beams that leave the optical table during the optical experiments , As exposing the eye to the laser radiation or diffuse reflection may cause the blindness .

You must not expose the skin to the laser radiation or the diffuse reflection , You have to be careful that you do not insert the hand or the other body part into the marking area during the operation , The laser may cause damage to the skin such as the burns .

If you install the head , You have to terminate the laser beam path to avoid the eye or skin exposure to direct or scattered laser radiation , the laser beam emitted by ML-Z9500 Series must be terminated at the end of its useful path by a diffusely reflecting material of appropriate reflectivity and thermal properties or by the absorbers .

You have to install ML-Z9500 series so that the path of the laser beam is not as the same height as that of human eye , You should not disassemble ML-Z9500 Series , Otherwise exposure to the laser radiation and the electric shock may result .

The ML-Z9500 Series is not under warranty and cannot be repaired if it has been disassembled , You have to be sure to turn off MLZ9500 series before performing the maintenance tasks such as cleaning the lens and you should wear protective eye goggles during maintenance .

You should not irradiate the laser beam onto mirrored metal materials , The CO2 laser cannot mark metal materials , Never attempt to mark highly reflective metal materials , All non-optical objects that are close to the optical plane should have a matte finish to prevent specular reflections such as the jewelry & watches .

ZnSe ( zinc selenium ) is used for the lens and the other optical parts , ZnSe is treated as a poison by law , Rely on the company which handles the industrial waste when disposing of the product .

You should turn off all power before connecting the controller power cable , Otherwise , It may cause an electric shock , High-intensity beams can cause the fire or the skin damage ( mainly from class 4 and ultraviolet lasers) and which are not frequently modified should be guided through opaque tubes .

You have to eliminate the dust or the fumes occurring during marking using an appropriate dust/fume collector to prevent these particles from entering the human body , Depending on the marking target material , this may cause damage to human body .

Bad effects of laser on the human body

The denaturation of protein is due to the heat effect of laser beam , The photo-chemical reactions in the cell tissues or the tissue destruction caused by the impact waves ( the plasma flow and resulting pressure waves ) may occur .

Many direct biological effects of laser depend on the wavelength , output and output waveform ( continuous wave or pulse wave ) of the laser beam , but it is more likely to cause serious , irreversible damage to the eyes rather than to the skin .

The argon laser , YAG laser or CO2 laser , that all radiate continuous or long pulse waves , cause the following problems due to the heat effect or the photo-chemical reactions :

When the wavelength of laser beams is out of the range of perception ( ultraviolet ( 200 to 400 nm ) and near-infrared ( 1,400 to 106 nm )) , They are absorbed in the tissues of cornea or lenses , causing the cataract with corneal burns or visual degradation .

When the wavelength of laser beam is within the range of perception ( visible ( 400 to 780 nm ) and near-infrared ( 780 to 1,400 nm )) , They are focused on the retina because of the eye’s optical systems ( cornea and lens ) and the density becomes approximately 105 times greater , This causes the following problems :