Google Play Store is filled with great apps that you wish you could run on your desktop, With an Android emulator, you can get access to all of these apps on your computer, Android emulators can reduce the lag in Android games, you can take advantage of PC controls, and you can enjoy your phone’s capabilities on a larger screen.

Smartphones are used for entertainment, communication, doing work, studying, keeping up with the news, and so much more, there are new and better apps and games in the Google Play Store, Smartphones are portable, innovative, and useful gadgets, but unlike PCS, they are not designed for prolonged use and abuse as you do in a PC.

Apps should be tested for its usability, consistency, and functionality, There are different strategies for mobile app testing and an android simulator is one among them, There are thousands of apps on the app markets, mobile app testing become very important to make sure that the app is technically fit to convince, attract and hold the customers, There are some emulators that are no longer supported or have been shut down such as AMIDuOS, Remix OS & Leapdroid. 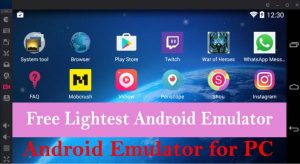 Xamarin is free, It is an IDE similar to Android Studio, The difference is that it can plug into things such as Microsoft Visual Studio for a larger development environment (for better or for worse), like the Android Studio, this comes with a built-in emulator for an app or game testing.

The setup is too tedious for regular consumer use, Xamarin’s emulator is not as powerful as something like Genymotion, but it’ll get the job done if you intend on using this and it’s also configurable for your needs, It’s free for personal use, Companies and larger teams may have to negotiate a payment plan.

YouWave is free, It is one of the older Android emulators for PC, It has been around for a long time, Its last update was in 2016, That makes it fairly current, The free version of YouWave uses Ice Cream Sandwich, It works nicely for those who want an older emulator that runs older Android, Forking out the $29.99 will offer the Lollipop version, It is very useful for light gaming & productivity.

Ko Player is free of cost, so, you can see a few ads here & there, The app player is easy to install & navigate through the apps, It supports keyboard mapping & gamepad emulation, It depends on delivering a lag-free gaming experience with lightweight software.

KOPlayer has Simple UI, It can set up any Android device, It is easy to set up, The downside of this Android emulator sometimes freezes out of the blue, the player is a little buggy and makes it difficult for the user to uninstall the Android emulator.

It is a suitable alternative for people that have been following RemixOS, The open-source Androidx86 based OS can be booted using a USB drive or can be dual booted on a PC, Gaming performance is very good, but the true potential of PrimeOS is to offer an Android-like experience on the desktop, Due to its stunning UI and Android support, PrimeOS can tantamount to ChromeOS in several instances.

PrimeOS is a powerful alternative for Bluestacks & other best Android emulators for PC, Coming to gaming and heavy usage, PrimeOS supports multi-window support & keyboard mapping in games, you would certainly see lags graphically intense games, PrimeOS offers the best overall Android experience, It has a beautiful user-interface and it has multi-window support.