Android emulator is a software which allows the computer system to behave like another computer system, For running smartphone Apps on PC, the emulator behaves like an Android system which can be installed on the Windows and the Apps from Store are installed on the emulator, With the help of an android emulator, we can experience better quality, and we can get more options.

Emulators can be used for productivity, This isn’t nearly as common because Chromebooks are cheaper & better for using Android apps on something other than the phone and most productivity tools are cross-platforms, Any gaming emulator works as a productivity emulator to an extent, those with hyper-specific use cases & a little knowledge can try ARChon & Bliss. 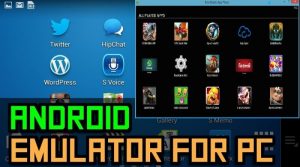 Bliss is free, It is different, It can work as an Android emulator for PC via a virtual machine, it can run on your computer through the USB stick, As a VM install, The USB installation method is more complicated, but it allows your computer run Android natively from boot, That makes Bliss a super unique emulator if you can make it through the steps to the end, Bliss only runs well if your system is compatible so be prepared with a backup of your current operating system.

Android Emulators can emulate Android on your Windows PC, Bliss OS needs to be installed as a separate OS, you could use a Virtual Box or you can create a bootable USB drive and install the Bliss OS ROM on the external storage, Bliss OS is open source & doesn’t encompass ads or any Android emulator clutter, It supports Beta version running on Android 9 Pie and it has Substratum Theme engine support.

GameLoop is free, It is formerly known as Tencent Gaming Buddy, It is an Android emulator for gamers, the keyboard controls are good, it’s good enough that Tencent calls it the official emulator for its games, it features other games aside from Tencent’s, although its collection isn’t as big as it could be.

GameLoop is not good for productivity or developmental testing, It is a decent gaming emulator, it can boast a good collection of newer titles, GameLoop has excellent keyboard and mouse integration, It has Call Of Duty official partner, It offers great performance, It is one of the best Android emulators for Windows 10 PCs, offering relentless gaming performance.

Game Loop has recently made it to the top Android emulators for PC, due to exclusive support for Call of Duty Mobile game on PC, Before the launch of COD, the emulator for Android only supported PUBG and a bunch of gaming titles from the Tencent Developer, GameLoop is dedicated to Android gaming, so, it has the lack of support for other Android apps.

LDPlayer is free, It is another Android emulator for gamers, It features the usual array of gamer-oriented features such as good keyboard mapping controls & support for the latest games, LDPlayer gets active updates, The last update fixed a bug that caused Call of Duty Mobile to crash, It supports a range of other games such as Clash of Clans, Brawl Stars, Black Desert Mobile, PUBG Mobile, and many others, It runs on an older version of Android so, we’d like to see it get an update in that department eventually, However, it’s otherwise a decently solid experience.

Phoenix OS is free, It is one of the newer Android emulators for PC, it boasts a gamer experience, However, it boasts a desktop-like experience, so, it works pretty well for productivity as well, It offers Google Play Services, although updating those services can be a bit of a pain sometimes, so, you get every app and game in the Google Play Store, Phoenix OS runs Android 7.1 which is relatively modern for an Android emulator, You can download the emulator from its official website and its forums are housed on XDA-Developers.

PrimeOS is free, It is a type of a standout in the Android emulator space, It is not actually an emulator, You can install this as a partition on your computer and it boots up running native Android, It’s a gamer-focused Android experience, although you can totally use this for productivity if you want to, PrimeOS includes a gaming center, support for mouse and keyboard, and access to most Android apps & games, it runs like ChromeOS minus all the Chrome parts, You can multitask, watch video content, or play games as you choose.