Android emulators can be used for many purposes such as developers testing apps & gamers playing on a large screen, If you are switching from iPhone, Android, or you want to test out a Custom ROM, the possibilities with Android Emulators on Windows 10 are endless, BlueStacks has always topped the list of phone emulators for PCs.

Android emulator is based on Android, It has predefined configurations for various Android phone, tablet, Wear OS, and Android TV devices, you can simulate rotation and other hardware sensors, access the Google Play Store, and much more, You can test your app on the emulator faster & easier than doing, so on a physical device, you can transfer data faster to the emulator than to a device connected over USB.

Android Emulator can be used to simulate Android devices on the computer so, you can test your application on many devices & Android API levels without needing to have each physical device, It offers almost all of the capabilities of a real Android device, You can simulate incoming phone calls & text messages, specify the location of the device and you can simulate different network speeds.

You can use the emulator manually through its graphical user interface & programmatically through the command line and the emulator console, The Android Emulator has additional requirements beyond the basic system requirements for Android Studio, which are SDK Tools 26.1.1 or higher, 64-bit processor, HAXM 6.2.1 or later (HAXM 7.2.0 or later recommended), Windows: CPU with UG (unrestricted guest) support. 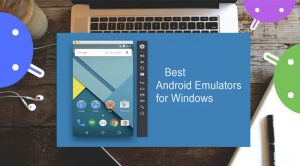 Genymotion is free with paid options, It is mostly for developers, It allows you to test your apps on many devices without owning them, You can configure the emulator for many devices with various versions of Android to help suit your needs, you can run a Nexus One with Android 4.2 or a Nexus 6 with Android 6.0.

Genymotion is not great for consumer uses, but it does not offer its services for free for personal use, Its most useful feature is its availability on both your desktop computer & the cloud, Those without powerful computers can make Genymotion’s servers do all the work for them, Genymotion supports Android Studio, It runs on macOS & Linux, It can run versions from Android 4.1 to 8.0 and its price is Trail/Premium $136 per year.

It is not your casual Android emulator, it is only targeted at developers, The Android simulator allows you test apps on a variety of virtual devices with different versions of Android, Genymotion is compatible with Android SDK and Android Studio, It is inclined towards developers, it is equipped with many developer-friendly features, it isn’t the right choice for people looking for Android gaming experience.

Nox player is entirely free & in active development, It is Android emulator for PC for gamers, It includes the usual stuff like key-mapping with your keyboard, actual controller support, and the ability to key-map gesture controls, you can assign the function to swipe right to an arrow key and use that in a game without actual hardware controller support, It is a lot of fun & seems to work rather well most of the time.

It targets Android gamers, Although the emulator is fine for using Android apps & enjoying the whole Android experience, it is best suited for playing massive games such as PUBG or Justice League, It allows you to map keys of keyboard, mouse, and gamepad, You can assign keyboard keys for gestures, for instance, mapping shortcuts or for swiping right.

Nox Emulator comes with Stunning UI, It supports multiple windows on a single device, it supports mapping shortcuts on controllers, You can specify the CPU & RAM usage in the settings option to get the best gaming results, If rooting Android is your focus, Nox Player makes it easy to root the virtual device in under one minute, but Nox puts a lot of load on the system, so, you can’t use tons of other apps.

Nox Emulator is free with no sponsored ads at all, the Nox app player went from the best emulator for Android to the worst of all, although it’s still free, Nox emulator offers unwanted software that users have described as “difficult to delete,” Moreover, several popular antiviruses have described Nox system files as suspicious.

Remix OS Player by Jide is free, It is one of the newer Android emulators for PC (comparatively speaking), It runs Android Marshmallow and that’s still new compared to many of the others on the list, The installation process is simple and using it also fairly easy, It caters mostly to gamers, There are a few gamer specific features along with a customizable toolbar, Remix OS boasts features such as running multiple games at once, it’s a fairly clean emulator so it’s still perfectly usable as a productivity tool.

Remix OS comes with Android OS experience, It has new file manager, It is good for productivity apps but it does not support heavy gaming, Remix OS isn’t like other Android emulators out there, It is an entire Android OS that you can boot into, Unlike other emulators that can easily be on top of the Window, Remix OS can be installed on a separate partition.

Remix OS emulator is a Jide Technology product, Jide is a company formed by Google’s former employees, You can put Remix OS on the USB device and boot from there to any computer on the planet, Jide technology has killed its support, but you can still download the latest Android Marshmallow version, a similar project known as Phoenix OS is being well-liked among Remix OS fans and the project was updated to Android 7 Nougat.

ARChon is free, It isn’t a traditional emulator, You can install it as a Google Chrome extension, It provides Chrome with the ability to run Android apps & games, It’s not an easy emulator to get running, you should obtain APKs & load them in, you need to use a tool to change the APK to make it compatible, There are many steps to make this work than most other Android emulators for PC, ARChon can work with any operating system, and it is the best android emulators for every platform.