The scientists classified the elements according to their properties to facilitate their study and to find a relationship between the elements, and their chemical and physical properties.

There were only 67 elements that were known in Mendeleev’s periodic table, Mendeleev classified the elements in ascending order according to their atomic weights.

Mendeleev left gaps in his table predicting the discovery of the new elements, and he corrected the atomic weights of some elements which were estimated wrongly.

But Mendeleev had to make a disturbance in the ascending order of the atomic weights of some elements to put them in the groups that suit their properties.

Mendeleev had to deal with the isotopes of one element as different elements due to the difference in their atomic weights. So, He had to put more than one element in one cell of his table.

Moseley classified the elements in ascending order according to their atomic numbers, He added the zero group which includes the inert gases to the table, and he specified a place below the table for lanthanides and actinides elements. 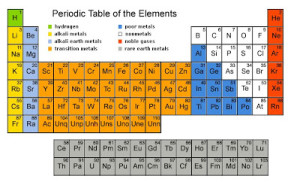 There are 116 elements in the modern periodic table.

The elements are classified in ascending order according to their atomic numbers, and the way of filling the energy sublevels with the electrons, The number of the known elements in the modern periodic table till now is 116 elements, 92 elements are available in the Earth’s crust, while the rest are prepared artificially.

There are 7 horizontal periods, and 16 vertical groups (18 vertical columns), and the elements are classified into 4 blocks (s, p, d, and f).

The description of the modern periodic table