The atomic structure of the matter

The atom is the fundamental building unit of the matter, and it is the smallest individual unit of the matter which can share in the chemical reactions, Boyle, Thomas, Rutherford and Bohr are from the scientists who contributed the discovery of the atom construction.

The atomic radius of an atom is measured by a unit called Angstrom, and one Angstrom equals a part of ten thousands million parts of one metre, The radius of hydrogen atom equals 0.3 Angstrom, and this indicates how much the atom is small. 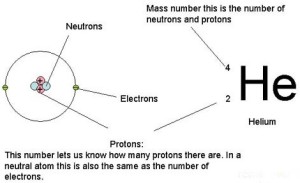 The atom consists of the nucleus and the electrons, and it is electrically neutral in its ordinary state, The nucleus is the central core of the atom, where the mass of the atom is concentrated in it.

The electrons are negatively charged particles, they revolve around the nucleus with very high speed, The electrons have a negligible mass relative to that of the protons or the neutrons, so the mass of the atom is concentrated in the nucleus.