Not all known fossils are considered as index fossils because the index fossils are the fossils of living organisms that lived for a short period of time in the past and had a wide geographic distribution, then became extinct and these conditions are not available in all fossils.

Fossils are considered as an exciting world (a story told by sedimentary rocks), that tells us about the deep past, million years ago even before the creation of man on the Earth. Fossils are traces and remains of old living organisms that are preserved in sedimentary rocks.

Fossils are classified according to the way of formation (or preservation) into several types, among them are: 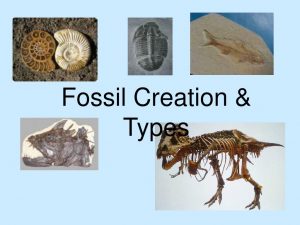 Fossils of a complete body

It is a type of fossils, which was formed as a result of the rapid burying of the organism as soon as it died in a medium that preserves it from decomposition as snow or amber. Such as Mammoth fossil and Amber fossil.

A complete body fossil is a fossil that keeps the whole shape and all the details of the body of the living organism as a result of its rapid burying as soon as it died in a medium that preserves it from decomposition. Mammoth fossil is preserved as a complete body fossil because when it died, it was rapidly buried in snow which preserved it from decomposition.

Mammoth fossil: Mammoth (a type of elephant) was extinct by the snow avalanche that occurred in Siberia 25000 years ago. The first mammoth fossil, which was discovered last century, and keeps the whole shape, hair, flesh, and food in its bowel (stomach). After its death, the mammoth rapidly buried in snow which preserved its body from decomposition.

How is the solid mold fossil formed?

How to make a candle mold?

To make a model of cast: Get a colored clay and a shell of a clam, Then press on the clay with your hand to make a plane surface. Put the shell on the surface of the clay and press it gently, Remove the shell from the clay. The details formed on the clay are the same details of the external surface of the shell. A replica of the original external shell shape is formed and it is known as “Cast”

Mold and a trace

Petrified fossils are fossils in which minerals replace the organic matter of an old living organism, after its death, part by part leaving the shape without any change

Petrified wood is fossils that are formed as a result of replacing the wood material of trees with silica, part by part giving us details about the life of an old plant.

How is the petrified wood formed?

Petrified woods are considered fossils although they look like rocks because they give us the details about the life of an old plant. Formation of petrified woods fossils due to replacing the organic matter of wood by silica part by part.

The area of petrified forests in Qattamiya is called the wood mountain because it contains petrified woods, which look like rocks. An Egyptian dinosaur has been discovered in Bahariya Oasis, Giza governorate and parts of it are being displayed in the Egyptian Geological Museum.

Fossils are important because they help in:

The scientists notice that: The lower layers of sedimentary rocks have fossils, whose relative age is greater than that of the fossils of the upper layers, these fossils are known as index fossils.

Nummulites fossils are considered as index fossils because they indicate the age of sedimentary rocks, as the age of rocks, is the same age of fossils that existed in them.

Figuring out the paleoenvironment

Fossils give us an idea about the environment, in which they lived during the old geologic ages, therefore they indicate the climate of these ages. Examples:

Studying the fossil record showed that: Life started first in the sea then established on land. Organisms always developed from simple to complicated. Fossil record: The sequence of fossils in sedimentary rock layers according to their sequence of appearance from simple to complicated. In plant world, Algae appeared before Mosses and Ferns. Gymnosperms appeared before angiosperms.

In the animal world, Invertebrates like corals and mollusks with shells appeared before vertebrates, Fish were the first vertebrates that appeared followed by amphibians then reptiles, and finally, birds and mammals appeared together. Archaeopteryx fossil is considered a link between reptiles and birds.

When searching for petroleum, geologists take samples from the rocks of the exploratory wells. These samples are studied under the microscope. If they contain microfossils like Foraminifera and radiolaria, this could point to:

Fossils are important in petroleum exploration because the presence of foraminifera and radiolaria in the rocks of the exploratory wells indicate the suitable conditions for petroleum formation.