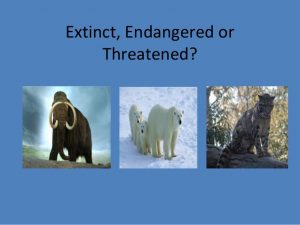 Many scientists attributed macro extinction of some living organisms (like the extinction of dinosaurs) may be due to the occurrence of:

Reasons for extinction in recent ages

Recent extinction occurred now is caused by different factors. Most of them are due to the interference of man with nature such as:

Examples of some extinct species in the old times: Hundred millions of organisms extinct in the old times. The most famous of them is Dinosaur and Mammoth. Dinosaur became extinct 66 million years ago. Mammoth is called the grandfather of the recent elephant.

Examples of some extinct species in recent times: The dodo bird is a non-flying bird, due to the reduced size of its wings so, it is an easy target for hunters. Quagga is a mammal animal, It is considered the midway between horse and zebra.

Examples of some endangered species: There are about 5000 endangered species like Panda bear, Rhinoceros, Ibis bird, Barbary sheep (Arui), The bald eagle is called bald because its head is covered with white feathers which makes it looks bald, and Papyrus plant is used by pharaohs to manufacture writing papers. Ibis bird, barbary sheep, and papyrus plant are considered from Egyptian environmental organisms.

Effect of extinction on the ecological equilibrium

Groups of food chains are connected forming a food web. The Food web is a group of food chains connected with each other. The system remains balanced unless one of its members is absent, When an organism disappears its role stops affecting the rest of the members of the food chain or the food web.

Extinction of species or a group of species from a balanced ecosystem causes a cavity (cut link) in the path of energy in this ecosystem that would disturb the ecosystem equilibrium or destroy it.

The ecosystem is classified according to the degree of the effect of extinction on it into:

It was necessary for the scientists to think of ways of protecting species endangered by extinction to keep the ecological balance so the ecological systems from destruction.

Wadi El-Hetan (part of Wadi El-Raiyan protectorate in El-Fayoum) is considered the most important area in this protectorate because it contains complete whales’ fossils from 40 million years ago. Ras Mohamed protectorate (shaped as a chin).