The function of pharynx, esophagus & stomach in the digestive system 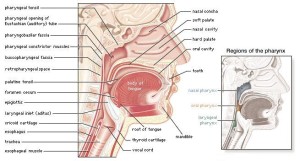 The pharynx in the human body.

The conducting zone includes the nose, the larynx, the trachea, the bronchi and the bronchioles, and their function is to filter, warm, and moisten the air and conduct it into the lungs, The human pharynx is divided into three sections which are the nasopharynx, the oropharynx and the laryngopharynx.

The esophagus empties into the cardia of the stomach, and during swallowing, the epiglottis prevents the food from going down the larynx.

The stomach is a sac-like muscular organ, and it is a hollow, dilated part of the digestive system which located on the left side of the upper abdomen, The stomach is located between the esophagus and the small intestine, and it has a relaxed near empty volume of about 45 to 75 millilitres, and it normally expands to hold about one litre of food. 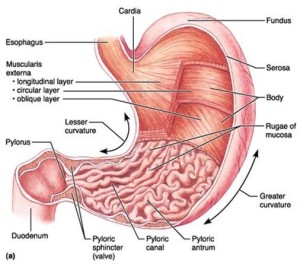 The stomach in the human body.

The stomach secretes the gastric juice that makes the incomplete digestion of the proteins, The stomach receives the food from the esophagus, and enters the stomach through a muscular valve called the lower esophageal sphincter.

The stomach mixes the food with its gastric (digestive) juice to form a semi-liquid substance after a few hours that can be digested easily, The stomach is divided into four sections beginning at the cardia, and each of them has different cells and functions.

The cardia is where the contents of the esophagus empty into the stomach, and the cardia is defined as the region following the z-line of the gastroesophageal junction.

The fundus is formed by the upper curvature of the stomach, the body is the main central region and the pylorus is the lower section of the stomach that facilitates emptying the contents into the small intestine.