Hormones in the human body

Hormone is a chemical substance ( or a chemical message ) that controls and organizes most of the vital activities and functions in the bodies of living organisms , Hormones are secreted in the body by some organs called Endocrine glands or Ductless glands .

This form is performed by the chemical substances secreted by the special cells in the body , these secretions , known as Hormones , The hormone is any member of a class of signaling molecules produced by the glands in multi-cellular organisms . 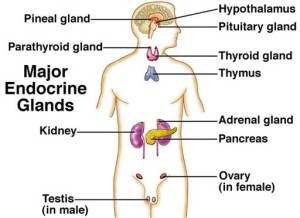 So , The blood is the only way for this hormone to reach its site of action ( target cells ) , Endocrine glands are called by this name because they secrete their hormones directly in the blood without passing through the ducts .

The endocrine glands secrete the hormones in limited quantities , If one of the glands does not act properly , the balance of action of these glands gets disturbed and man has a state of a hormone disorder .

The most important endocrine glands in the human body

The glands are located throughout various parts of the human body , These glands take on the critical task of releasing hormones , There are many important glands in the human body such as Pituitary gland , Thyroid gland , Adrenal glands , Pancreas , Two tests , And two ovaries .

The ability of the target cell [ disambiguation needed ] to respond to the hormone depends on the receptors presence within the cell or on its plasma membrane , to which the hormone can bind .

Blood levels of hormones reflect the balance between the secretion and the degradation/excretion , The liver and the kidneys are the main organs which degrade the hormones , breakdown the products are excreted in the urine and the feces , Hormone half-life and duration of activity are limited and vary from hormone to hormone . 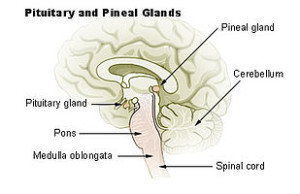 It is located below the brain , It is a small gland in the size of a pea seed , It consists of two lobes , It secretes the hormones that regulate the activities of other endocrine glands , It is known as the master gland or the main gland .

Growth hormone controls the speed of growth rate of body muscles , bones and other organs , It determines the height that the person will reach when he becomes a fully grown .