The movement is the ability of the organism to change its position from a place to another, it is from the characteristics that distinguish between the living organisms & non-living things, The human movement occurs with the participation and integration of special organs and systems such as the skeletal and the muscular systems & also the nervous system that regulates the movement, The system that is responsible for applying the movement is the locomotory system.

The structure of the locomotory system

The movement of our bodies depends on the work of our muscles and bones together, The locomotory system consists of the skeletal system and the muscular system. 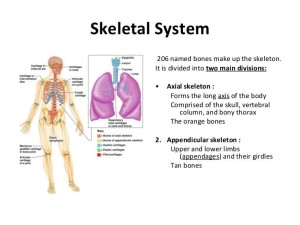 The skeletal system in the human body

The skeletal system consists of the axial skeleton and appendicular skeleton.

The axial skeleton consists of the skull, the backbone and the rib-cage, The skeletal system gives the shape to the body, and without it, the body will look like a paper kite without a rigid frame.

The skeletal system supports the body weight, and without it, you can not stand or sit, The skull protects the brain, and it is a bony box contains cavities for the eyes, the ears and the nose.

The backbone represents the axis of the skeleton, It consists of 33 vertebrae, It contains cartilages between the vertebrae to prevent their friction during the motion, The backbone allows the body to bend in the different directions and it protects the spinal cord.

The rib-cage consists of 12 pairs of ribs, The first 10 pairs are connected to the sternum (the breast bone) anteriorly, The rib-cage protects the lungs and the heart, It helps in the inhalation and exhalation processes (the breathing).

The human skeleton system is the internal framework of the body, It contains around 300 bones at birth and decreases to 206 bones by the adulthood after some bones have fused together, Bone mass in the skeleton system reaches maximum density around age 30.

The skeletons of the adult males and females have some variation, primarily to accommodate the childbirth, The female pelvis is more rounded, proportionally larger and flatter, The male’s pelvis is nearly 90 degrees or less of angle, while the female’s pelvis is 100 degrees or more.

There are two types of tissues inside the bones which are Compact bone and Spongy bone.

Compact bone is dense & hard tissue that makes up the outer layer of most bones and the main shaft of long bones, such as those in the arms and legs, Nerves and the blood vessels live inside this tissue.

Spongy bone is made up of smaller plates filled with red bone marrow, It is found at the ends of long bones, such as the head of the femur and at the center of the other bones.

There are other common conditions which affect the skeletal system include Osteoporosis (It is the disease in which the bones become fragile and prone to the fracture), Leukemia (It is a cancer of the white blood cells).

Osteopenia, osteitis deformans, and osteomalacia (Similar to the osteoporosis, these are other types of the bone loss), Scoliosis, kyphosis, and lordosis (They are the abnormalities of the spinal curve).