Living organisms life depends on the occurrence of chemical reactions inside their bodies , these reactions are called metabolism ,  Metabolism is necessary for growth , repairing the damaged tissues and obtaining the energy .

Metabolism is a group of biochemical reactions take place inside the living cells , in which : Some molecules are broken down to extract the chemical energy stored in their chemical bond , This process is called catabolism .

Complex and macromolecules are being built from simple molecules , This process is called anabolism , Metabolism is divided into the catabolism and the anabolism .

The catabolism is the process of breaking down of macromolecules into simple ones to extract the energy stored in the chemical bonds of these molecules , such as releasing the energy from the glucose oxidation process during cellular respiration .

Anabolism is the process of using simple molecules for building more complex substances throughout a chain of chemical reactions that consume the energy , such as synthesis of proteins from amino acids and Photosynthesis in green plants. 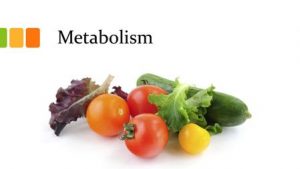 Activation energy is the minimum energy needed in order for a chemical reaction to occur, Enzymes are biological catalysts made up of protein molecules and increase the speed of chemical reactions inside the cell.

The origin of word Enzyme: Enzyme is a Latin word means ( in the yeast ) where the enzymes had been discovered at the first in the process of glucose fermentation into alcohol by the yeast.

Enzymes participates in the chemical reactions inside the cell to speed up them without being affected or consumed ( they are similar to the other chemical catalysts ), Enzymes are affected by hydrogen ion concentration ( pH ) and temperature in their action.

Enzymes are highly specific than other chemical catalysts where each enzyme is specific to : one reactant substance called substrate and one type or few types of reactions, Enzymes lower the activation energy needed to get the reaction stared.

Enzymes are sensitive to thermal changes because they are made up of protein substances, Enzymes activity is determined in a narrow range of temperatures ( comparatively to the ordinary chemical reactions ) , Where : Each enzyme has an optimal temperature at which the enzyme is more active and it ranges between 37 : 40 degree Celsius .

Temperatures are recorded on some detergents to use them properly in order to the activity of enzymes they contain do not affected .