They are biological macromolecules ( polymers ) made up of many smaller molecules ( monomers ) called amino acids , Proteins have high molecular weight and they made up of structural units which are amino acids .

Amino acids are organic compounds made up of ( H , O , C , N ) atoms and they represent the proteins building units, Amino acid is the building ( structural ) unit of the protein , It consists of a carbon atom attached to : 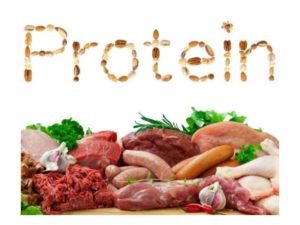 Amino acid and building of protein

Glycine is the lonely amino acid that does not contain group ( R ) where it is replaced by a hydrogen atom.

Proteins are classified according to the substance involved in their structure into Simple proteins and conjugated proteins .

They are formed of amino acids only such as Albumin protein which presents in the leaves and roots of plants and the human blood plasma .

Albumin protein prevents the leakage of fluids from the blood vessels into the tissues , So, it maintains osmotic pressure inside the cells , Therefore, its lack in the body leads to occurrence of disorder in osmotic pressure of the cell and makes the body keeps large amounts of fluids that cause a swelling especially in the feet and face .

They are made up of amino acids associated with other elements such as phosphorus , iodine , iron and others .

Biuret’s reagent is used in detecting proteins in urine .

Proteins are involved in the structure and functions of living cells , where :

You notice that spider’s net , hooves and hornes of animals are basically made up of proteins .