Human body contains a system that is responsible for the extractions of oxygen from the air , and then transfers it to the blood , then to the cells of the body , this system is called respiratory system , Respiratory system in man consists of many organs , each one is suited to perform its function , as follows :

Nose or mouth : The air enters the body through the nose or the mouth , but it is preferable ( from the hygienic point of view ) for air to enter through the nose , because it is a warm passage , as it is lined with numerous blood capillaries , It is moist , as it secretes mucus , It serves as a filter , because it contains hairs which act as filters .

Pharynx : Air passes through it which is the common passageway for both air and food .

Larynx : The air enters the trachea through it and it is known as the voice box .

Lungs : Each animal including man possesses two lungs , a right lung and a left lung , They are characterized by having a large surface through which gas exchange occurs , Each lung consists of a group of alveoli that are connected to the bronchioles and the surrounding blood capillaries . 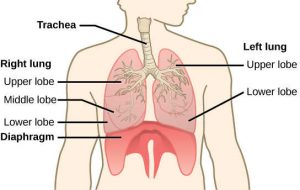 They are large in number reach to about 600 million alveolus per lung , to increase the respiration surface area , Their walls are considered as the actual respiratory surface , because :

Role of the respiratory system in the excretion process

Respiration process in plant is the process of getting the chemical energy stored in the organic substances ( glucose ) through a chain of reactions which includes the breaking down of carbon bonds of these substances to carry out the vital activities .

In most plants , each living cell is in a direct contact with the external environment , therefore the gaseous exchange is easy to occur , In this case oxygen diffuses inside , while CO2 is released outside the cell .

Types of respiration process in plant :

Methods of CO2 expelling to outside ( that is produced from the respiration :

Relation between photosynthesis and respiration in plant

Cellular respiration , Structure of ATP and types of fermentation

Excretion in plants , Importance & types of transpiration for the plant