Kinds of mutation according to its inheritance, its importance, position & origin of mutation

Mutation is a sudden change in the nature of the hereditary factors that controlling certain traits, which leads to a change of these traits in the living organism, Causes of mutation are due to change in the structure of genes, change in the environmental effects, change in the number of chromosomes and Segregation and recombination of genes. 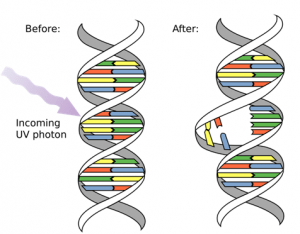 First: According to its inheritance

Second: According to its importance

Third: According to the type of mutation

Mutation occurs due to the chemical changes in the gene structure (in the arrangement of the nitrogenous bases of DNA molecule) that leads to the production of different protein which would, in turn, develop a new trait.

The change in the chemical structure of the gene is often accompanied by a change from a dominant gene to the recessive gene and the opposite may occur in some rare cases.

The mutation occurs due to a change in the number or structure of chromosomes.

Change in the number of chromosomes (after meiotic division)

Duplication of the number of the chromosomes: Its causes are non-separation of the chromatids after the centromere division, The failure of membrane formation between the two daughter cells, Its commonness and effect:

In plants: it is more common, where a large proportion of known plants have polyploidy (3n, 4n, 6n, 8n, up to 16n) when the chromosomes are duplicated during the gamete formation and this results in the production of the individual with new characters.

Because each gene is represented by many copies, thus its effect becomes more pronounced, so, the plant becomes taller and consequently its organs become bigger, especially the flowers and fruits, Nowadays, there are many tetraploid (4n) crops and fruits such as cotton, wheat, apples, grapes, pears, strawberries and many others.

Triploidy in man is found to be lethal and causes the miscarriage, However polyploidy may occur in some liver and pancreas cells in man.

Change in the structure of chromosome

It occurs due to a change in the arrangement of genes of the same chromosome, because of:

Fourth: According to the position of mutation

Gamete mutation occurs in the reproductive cells (gametes), The new traits will appear in the resultant embryo, It occurs in the living organisms that reproduce sexually.

Somatic mutation occurs in the somatic cells, It appears as sudden symptoms in the organ whose cells are mutated, More common in plants that reproduce vegetatively, where a new branch may grow from the normal plant carries new and different traits from the original plant, this branch may be cut off and propagated vegetatively if this trait is desirable.

Fifth: According to the origin of mutation

It originates by itself without any human interference and it is rare in all organisms, It plays an important role in the evolution of the living organisms, Its causes are certain environmental factors, such as Ultraviolet rays, Cosmic rays and Chemical compounds.

Mutations induced by man to produce desirable changes in the traits of specific organisms, Man uses some factors to induce mutation:

Such treatments cause atrophy and death of the growing tip cells of the plants, New tissues are regenerated underneath these dead cells, these new tissues contain some polyploid cells, Most induced mutations produce undesirable traits, but man selects the useful ones from them.

From the examples of the desirable induced mutations: