Antibacterial agents are a group of materials that fight against pathogenic bacteria, so, by killing or reducing the metabolic activity of bacteria, their pathogenic effect in the biological environments will be minimized. Antimicrobial agents can prevent bacterial plaque accumulation in the oral environment and therefore, they can reduce the prevalence of plaque-related diseases such as caries.

Antimicrobial agents are a large variety of chemical compounds and physical agents that are used to destroy microorganisms or prevent their development.

Classification of antibacterial agents may be based on their spectrum and mechanisms of action.

The spectrum of activity of antibacterial agents

Selective toxicity. The antibiotic selectively inhibits or kills the microorganism but has little or no toxic effect on the patient. It is accomplished by finding vulnerable targets in the microbe (e.g. bacterial cell wall) that do not exist in the human host. It may also depend on the inhibition of biochemical events essential to the pathogen but not to the host (e g cotrimoxazole). 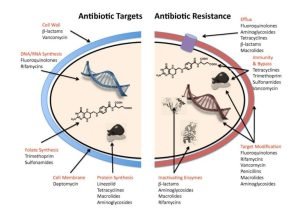 It is convenient to present these mechanisms of action under 6 headings:

(All penicillins, all cephalosporins, carbapenems, monobactams, and glycopeptides). These drugs are selective inhibitors of bacterial cell wall synthesis All are bactericidal agents. It is important to remember that all antibiotics inhibiting cell wall synthesis are effective only on growing cells (metabolically active cells).

They are B-lactam drugs that bind to cell wall receptors called penicillin-binding proteins (PBPS), some of which are (transpeptidases that catalyze the final cross-linking step in the synthesis of peptidoglycan. After a β-lactam drug has attached to its receptors, the transpeptidation reaction (cross linking) is inhibited and peptidoglycan synthesis is blocked, A final bactericidal event is the activation of autolytic enzymes in the cell wall resulting in cell lysis.

They are more during the log phase of bacterial cell growth. They are activated by β-lactamases that cleave the β-lactam ring.

They are β-lactam drugs that act in the same manner as penicillins.

They are broad-spectrum β-lactam drugs that are structurally different from penicillins and cephalosporines and they are not inactivated by β-lactamases, however, carbapenemases that degrade them have recently emerged.

They are narrow spectrum β-lactam drugs that are structurally different from penicillins and cephalosporines and they are not inactivated by β-lactamases. The first marked monobactam was aztreonam.

A glycopeptide is not a β-lactam drug and it is not inactivated by β-lactamases. These antimicrobial drugs, acting on both aerobic and anaerobic Gram-positive organisms that inhibit peptidoglycan synthesis by binding to the specific precursors of the cell wall thus preventing it from accomplishing its action (β-lactam drugs bind to the transpeptidase itself), e.g. vancomycin & teicoplanin. Relative to other antibiotics, they are extremely large which prevents them from passing through porins in the outer membrane of Gram-negative bacteria.

The cytoplasmic membrane of bacteria is structurally and chemically similar to that of human cells, Consequently, it is difficult to obtain an antibiotic with sufficient selective toxicity. One advantage of antibiotics that affect bacterial cell membranes is that they are lethal (bactericidal) even to non-growing cells. Examples include; the polymyxins [e.g. polymyxin E (Colistin) acting on many resistant Gram-negative rods. They disrupt the phospholipid structure of the cell membrane.

Bacteria have 70 S ribosomes, whereas mammalian cells have 80 S ribosomes The subunits of each type of ribosome, and their chemical composition is sufficiently different to explain why antimicrobial drugs can inhibit protein synthesis in bacterial ribosomes without having a major effect on mammalian ribosomes, The antimicrobial drugs inhibit protein synthesis either by acting on the 30 S subunit or the 50 S subunit.

Drugs acting on the 30 Subunit include:

Drugs acting on the 50 S subunit include:

They can enter the reaction in place of PABA and compete for the active center of the enzyme. As a result folic acid is not formed, preventing the further growth of bacterial cells Inhibition by sulfonamides is selective (i.e. toxic only to bacterial cells) because animal cells can’t synthesize folic acid and must depend upon exogenous sources.

Trimethoprim inhibits dihydrofolic and reductase 50 000 times more efficiently in bacteria than in mammalian cells, This enzyme reduces dihydrofolic to tetrahydrofolic acid a stage leading to the synthesis of purines and ultimately of DNA, If sulfonamides and trimethoprim are used together, they produce sequential blocking resulting in a marked enhancement (synergism) of activity. The combination is called cotrimoxazole, It consists of 5 parts sulfonamides plus one-part trimethoprim.

Isoniazid is a bactericidal drug acting against Mycobacterium tuberculosis and other mycobacteria, It inhibits mycotic acid synthesis which explains why it is specific for mycobacteria and relatively nontoxic for humans.

Ethambutol is a bacteriostatic drug acting against Mycobacterium tuberculosis and many of the atypical mycobacteria. It inhibits the synthesis of arabinogalactan which inks mycolic acid with peptidoglycan.

Pyrazinamide is a bactericidal drug acting against Mycobacterium tuberculose but not against the atypical ones. It is particularly effective against the latent organisms in the lesion which are not affected by other antituberculous drugs.

Metronidazole is an antiprotozoal drug but has activity against anaerobic bacteria. It inhibits DNA synthesis.

Probiotics: These are not chemical antibiotics. but they are five non-pathogenic bacteria that may be effective in the treatment or prevention of certain human diseases. They bind to the receptor sites on the mucosa thus preventing the pathogenic bacteria from exerting their harmful effect i.e. they cause colonization resistance by which the non-pathogen excludes the pathogen from binding to its target site. Some of the best evidence in support of probiotic health benefits is in the treatment of antibiotic-associated diarrhea by Lactobacillus mamnosus.