Proteins are organic nitrogenous substances composed of carbon, hydrogen, oxygen, and nitrogen. The building units of proteins are the amino acids, i.e. Proteins are polymers of naturally occurring 20 amino acids. 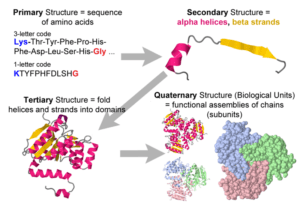 1- Aliphatic amino acids having no ring structure:
A. Neutral:

All amino acids show isomers as they contain asymmetric C atom in α-position with the exception of glycine so they are classified into:

According to the nutritional value (biological value)

They are amino acids that can not be synthesized by the human body, so they must be taken in the diet, they are valine, leucine, isoleucine, phenylalanine, tryptophan, lysine, methionine, arginine histidine, and threonine, proteins that contain all the essential amino acids are of high biological value e.g. meat, milk and egg proteins.

These are amino acids that can be synthesized in the body, and they include glycine, alanine, serine, cysteine, aspartic, asparagine glutamic, glutamine, tyrosine, and proline.  Arginine and histidine are called semi-essential because they are formed in the body at a rate enough for adults but not for growing individuals.

The amino acids found in proteins but are not primary

After the synthesis of proteins, some of the amino acids are modified in post-translation processing, they are called derived or modified amino acids, e.g.:

These are amino acids that do not occur in protein and they have no genetic codes, but they perform other functions in human metabolism e.g.:

Amphoteric properties: In solution, amino acids behave as acids and alkalis due to the presence of acidic group (-COOH) and basic group (-NH2), on complete ionization of neutral amino acids as dipolar ions (Zwitterions), they carry both negative and positive charges, which are equal, this explains the amphoteric property of amino acid, i.e. they can react with acids and bases.

The pH at which an amino acid carries an equal positive and negative charge (i.e.electrically neutral) is called its isoelectric point (IEP) or pl, when an electric current is passed in a medium where an amino acid occurs at its IEP, its ions do not migrate towards any of the electrodes. A zwitterion is the dipolar ion of an amino acid at its IEP in an aqueous medium.