Viruses are obligate intracellular parasites that depend on the biochemical machinery of the host cell for replication, They pass through bacterial filters (filterable) due to their small size (20-400 nm), They carry their genetic information in either DNA or RNA molecules, not both Their reproduction occurs by the assembly of individual components rather than by binary fission.

Viruses lack the capacity to produce energy and cannot make their own proteins or replicate their genome independently of the host cell. To infect a human or another host, virus structure and genetics have been optimized by mutations to bypass natural barriers, escape the host immune system and adapt to the host biochemical machinery.

Virion is the name of the complete virus particle. The simplest viruses consist of a genome (DNA or RNA) packaged in a protective shell of protein (capsid) and for some viruses, there is an extra membrane (envelope).

Genome: a viral nucleic acid sequence that must encode any required viral processes not provided by the host cell to produce viral components. It could be in the form of either: 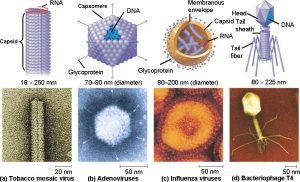 Features and classification of viruses

The outermost layer can be a capsid or envelope both are the structure for packaging, protection and delivery of the virus from one cell to another. Virus-encoded glycoproteins (peplomers) are exposed on the surface of this layer and some of them act as viral attachment proteins (VAP). This layer interacts with the target cell receptors through the VAP. Removal or disruption of this layer inactivates the virus and Antibodies generated against VAP prevent virus infection.

Capsid: Viral capsid is a rigid protein structure assembled from individual protein subunits that bind to form capsomers that bind to form the capsid, Some capsids are built around the genome (helical) and others form as an empty shell to be filled with the genome (icosahedral). Capsids can be symmetric e.g. helical or icosahedral or they can be nonsymmetric eg complex forms (bullet-shaped, brick-shaped, irregular e.g. bacteriophages).

Capsids can withstand harsh conditions, they generally resist dryness, acid, detergents, and bile, and most of them can be transmitted by the fecal-oral route and can endure transmission in sewage.

Functions of the capsid

Naked viruses are viruses that have a capsid as the outermost layer holding the VAP and are characterized by easy spread by contact, dust, or droplets. They retain infectivity even in dryness and can survive the adverse conditions of the gut. Antibodies may be sufficient for immunoprotection for most naked viruses. Usually, naked viruses are released from the host cells by cell lysis. Helical viruses appear as rods, whereas icosahedral viruses appear spherical.

The envelope is a membrane composed of lipids, proteins, and glycoproteins (similar to host cellular membranes from which it is derived). Enveloped viruses are viruses that have the envelope as the outermost layer holding VAP. The envelope is environmentally labile and can be readily disrupted by drying, acids, detergents, and solvents (e.g. ether) which result in the inactivation of the virus.

That is why enveloped viruses cannot survive harsh conditions as that of the GIT. They are transmitted mainly through fluids and secretions. Enveloped viruses do not need to lyse the cell to be released and need both antibody and cell-mediated immune responses for protection. Most enveloped viruses elicit hypersensitivity and inflammation to cause immunopathogenesis. Enveloped viruses usually appear spherical. VAPs are major antigens that elicit protective immunity.

The Effect of Physical and Chemical Agents

Means of classification of viruses

Use of Viral Vectors for Therapy

Genetically manipulated viruses can be excellent delivery systems for foreign genes, Viruses can provide gene replacement therapy, can be used as vaccines to promote immunity to other agents or tumors, and can act as targeted killers of tumors), The advantages of using viruses are that they can be readily amplified by replication in appropriate cells and they target specific tissues and deliver the DNA or RNA into the call.

Viruses that are being developed as vectors include retroviruses, adenoviruses, HSV an adeno-associated virus (parvovirus), poxviruses (e.g. vaccinia and canarypox), and some togaviruses, Adenovirus and canarypox virus are being used to carry and express HIV and other genes as vaccines. Vaccinia virus carrying a gene for the rabies glycoprotein is already being used successfully to immunize animals.