The central nervous system is composed of the brain and the spinal cord, the brain is a nerve block containing millions of the nerve cells (the neurons) and it is the main control center in your body.

The brain is located inside a bony box called the skull to protect it, It directs and coordinates all the processes ideas, the behaviours and the emotions, and it weighs about 1.5 kg in the adult human.

The brain of the human consists of three main parts which are the cerebrum (two cerebral hemispheres), the cerebellum and the medulla oblongata. 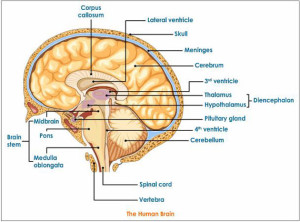 The brain structure of the human.

The cerebrum (the two cerebral hemispheres)

The function of the cerebrum

The cerebrum is a very important part in the brain as it controls the voluntary movements of the body such as running in the races, The cerebrum contains the centers of thinking and memory (the concentration).

The cerebrum receives the nerve impulses from the sense organs (the eyes, the ears, the nose, the tongue and the skin) and send the suitable responses to these impulses.

The cerebellum lies at the back area of the brain below the two cerebral hemispheres, and it maintains the balance of the body during the movement.

The medulla oblongata lies in front of the cerebellum, and it connects the brain with the spinal cord.

The function of the medulla oblongata

Damage to the medulla oblongata causes death, and it is responsible for regulating the involuntary processes of the body as regulating the heartbeats.