Humans reproduce sexually when two different persons mate, the male (♂) and the female (♀) using a special system called the reproductive (genital) system, Man can’t reproduce asexually but he only reproduces sexually because the individuals (offspring) coming from asexual reproduction are identical to the parent, while in humans each individual differs from others.

The male reproductive system consists of 4 main parts which are: 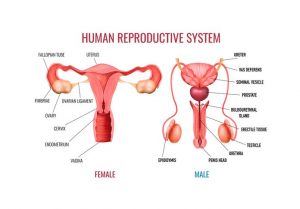 They are two glands of oval (elliptical) shape. They locate outside the body in a sac-like structure called scrotal sac (scrotum) which is hanged between male’s thighs.

Function of the scrotal sac

It regulates and keeps the temperature of testes 2°C below the normal body temperature which is the optimum (suitable) temperature for the growth and development of sperms.

Signs of puberty in male

If the testes are present inside the body and don’t come out during the development of the embryo, the testes cannot produce sperms, so the individual becomes infertile (sterile).

The testes of the elephant are present inside the body cavity. That’s why it is surrounded by a cooling system that preserves the optimum temperature for the testes to function efficiently and produce healthy sperms.

Each testis is connected to a group of fine convoluted (highly looped) tubes known as “Epididymis” which extends in the form of a single tube known as “Vas deferens”.

There are three kinds of genital glands connected to the male reproductive system, which are:

They pour secretions on the sperms to form an alkaline fluid known as seminal fluid.

When the sex glands can’t secrete the semen. The sperms die, so the individual becomes infertile (sterile). The sperms don’t die during their passage through the urethra because the seminal fluid neutralizes the acidity of the urethra.

The prostate is a muscular gland surrounding the urethra at the site of connection with the urinary bladder and it might be enlarged in some men above forty years. This leads to increase pressure on the urethra which eventually causes difficulty in urination, and needs to be removed surgically.

It is a sponge-like tissue, the urethra passes through it and ends in a urinary genital (urinogenital) opening.

Through which the semen and urine go out of the body through the urinogenital opening but never at the same time.

The reasons that lead to the occurrence of sterility (infertility) in the male hu being are:

The genital system in a female differs from that in a male in several aspects, mostly in being adapted to carry the embryo during the period of pregnancy. The female reproductive system consists of 4 main parts, which are:

They are two glands having the size and shape of a peeled almond. They locate inside the body in the lower part of the abdominal cavity from the back.

The ovulation process is the process of production of ova, where each ovary releases one ripe ovum every 28 days in exchange with the other ovary.

Signs of puberty in female

It is one of the signs of puberty in females. It repeats every 28 days, as long as no pregnancy happens, It starts at the age of female puberty (11 to 14 years) and stops at the age of menopause (45 to 55 years). Female menopause is the age at which the two ovaries completely stop releasing ova.

They are two tubes of funnel-shaped opening provided with finger-like projections, The inner wall of fallopian tubes is lined with cilia. The two fallopian tubes are located near the ovaries and end at the upper corners of the uterus.

They receive (trap) the ripe ovum and direct it towards the uterus with the aid of:

It is a hollow pear-shaped organ. It has a muscular wall that can expand as the fetus grows during pregnancy. It is lined with a mucus membrane rich in blood capillaries to form the placenta during the pregnancy. It locates in the pelvic cavity between the urinary bladder and the rectum.

The uterus is lined with a mucus membrane rich in blood capillaries to form the placenta which is responsible for the nourishment of fetus during the pregnancy through the umbilical cord.

It is a muscular tube that expands during labour. It extends from the uterus and ends in the external genital opening.

It expands during labour to deliver (coming out) the baby.