They are biological macromolecules ( polymers ) made up of many smaller molecules ( monomers ) consisting of carbon, hydrogen and oxygen atoms, All lipids are insoluble in polar solvents ( as water), but they are soluble in nonpolar solvents such as benzene and carbon tetrachloride.

The lipids can be classified according to the chemical structure into the large group of heterogenous compounds , as the following : 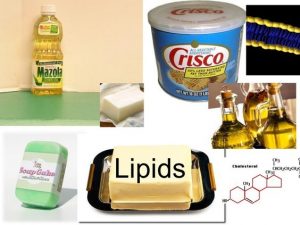 They are formed by the reaction of fatty acids with alcohols , They are divided according to the saturation degree of the fatty acids and the type of alcohols into :

Risks of the take away food

Ready meals, The fried food and many bakeries and the sweets contain a type of fats called trans fat that produced by hydrogenation of the vegetable oils, Extremely eating of these fats leads to elevation of cholesterol concentration in blood .

There are two types of fatty acids

Carbon , hydrogen , oxygen , phosphorus and nitrogen are involved in their structure , such as phospholipids that are present in the cell membranes of the animals and the plants, Molecular structure is similar to the structure of fat molecules but with a phosphate  group and choline replacing the third fatty acid in fats .

They are derived from both simple and complex lipids by hydrolysis ( a reaction is occurred by adding the water such as Cholesterol and Some hormones .

Sudan-4 reagent is used to detect fats in various foods such as oils , milk and peanut butter because it is a stain soluble in fats where it turns into red colour in the presence of fats .