The structural sequence of the living organisms

Classifications of molecules that enter in the living organisms’ cells

Classification of the biological macromolecules

The biological macromolecules are classified into four groups according to their molecular structure and the functions they perform , These four groups are Carbohydrates , lipids, proteins and nucleic acids . 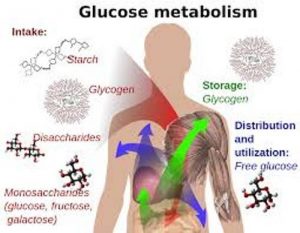 They are biological macromolecules ( polymers ) made up of many smaller molecules ( monomers ) called the monosaccharides , They include the sugars , starches and fibres .

The carbohydrates are classified according their molecular structure into simple sugars (Monosaccharides, Disaccharides) and the complex sugars (the polysaccharides).

Properties : They are water soluble , They have low molecular weight and they have a sweet taste .

Molecular structure are made up only of one molecule consisted of a chain of carbon atoms ( 3 : 6 atoms ) , each of them is connected to oxygen and hydrogen atoms in a certain way , Therefore , monosaccharides are the simplest type of sugars .

Monosaccharides such as Glucose ( grape sugar ) , Fructose ( fruit sugar ) , Galactose ( made in the glands that produce milk ) , Ribose ( pentose sugar ) ( it has 5 C atoms ) .

Molecular structure are made up of two molecules of monosaccharides linked together to form a disaccharide molecule .

Disaccharides such as Lactose ( milk sugar ) ( It is formed of Glucose molecule + Galactose molecule ).

Role of monosaccharides in energy transferring processes inside the cells :

During glucose oxidation inside mitochondria :

They are insoluble in water , They have molecular weight and they do not have a sweet taste, Molecular structure made up of many molecules of monosaccharides linked together, Complex sugars such as Starch , Cellulose and Glycogen ( Each molecule of them consists of  glucose molecules linked together by different ways ) .

Blue Benedict’s reagent is used for detecting simple sugars in the blood and urine.

Diabetic and obese patients must keep themselves away from taking sugary and starchy substances .

Carbohydrates are one of basic and fast resources for obtaining the energy .