Protein biosynthesis is a core biological process, It can be divided broadly into two phases – transcription and translation, It takes place inside cells to balance the loss of cellular proteins (via degradation or export) through the production of new proteins, Proteins can perform critical functions as enzymes, structural proteins or hormones and therefore, they are crucial biological components.

Protein biosynthesis (protein synthesis) can be described in 3 phases: initiation, elongation, and termination, the protein sequence is synthesized and read from the amino terminus to the carboxy terminus.

For initiation of protein biosynthesis, there must be:

tRNA charging means the recognition & attachment of the specific amino acid to the 3´ hydroxyl adenosine terminus (to the sugar) of tRNA in an ester linkage. 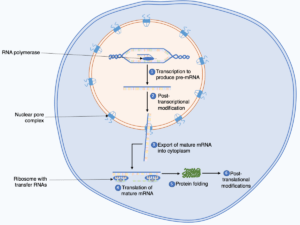 Formation of one peptide bond requires the energy resulting from hydrolysis of 4 high energy phosphate bonds:

eRF, GTP, and peptidyl transferase promote the hydrolysis of the bond between the peptide and the tRNA occupying the P site, then the 80 S ribosome dissociates into 40 S and 60 S subunits and mRNA, tRNA, eRF, GDP & Pi are released.

Protein biosynthesis takes place on ribosomes, many ribosomes can assemble to translate a single mRNA molecule forming a polysome. Polysomes are either found free in the cytoplasm or attached to the rough endoplasmic reticulum, depending on the protein being translated, the free polysomes are responsible for the synthesis of proteins required for intracellular functions, while attached polysomes synthesize integral membrane proteins and proteins to be exported.

Newly synthesized polypeptide chains undergo folding and posttranslational processing. These modifications may result in their activation to functional form, localization in a subcellular compartment, or their secretion from the cell.

As proteins emerge from ribosomes, they fold into three-dimensional conformations that are essential for their subsequent biologic activity. Molecular chaperones are proteins that assist in the process of proper protein folding, misfolded proteins are targeted for destruction.

(1) Proteolysis: proteolysis of proteins is a common maturation step, amino-terminal, carboxy-terminal or internal sequences can be removed from the protein.