On heating atoms of a pure elements – in gaseous or vapor state – to a high temperature or exposing them to a low pressure in an electrical discharge tube , they emit a radiation called emission spectrum ( line spectrum ) .

On examining this radiant light by a device called spectroscope , it was found that it is composed of a limited number of restricted colored lines separated by dark areas , So , it is called line spectrum , It is worth mentioning that the physicists – at that time – were not able to explain this phenomenon .

Application : The line spectrum of hydrogen atom appears ( on examining ) as four coloured lines separated by dark areas , It was found experimentally that the spectral lines are essential characteristics for each element , because there are no two elements have the same spectral lines . 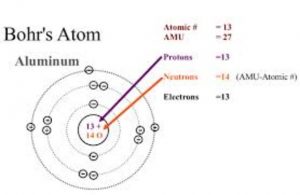 The study of atomic spectra is considered the key which solved the puzzle of the atomic structure , That was the work of the Danish scientist Niels Bohr upon which he was rewarded the Nobel Prize in 1922 .

Points that agree with Rutherford’s postulates

Electrons orbit the nucleus in a rapid movement without emission or absorption of any amount of energy and the atom in this case named stable atom .

Electrons orbit the nucleus in definite allowed energy levels , They can not be found at intermediate distances , at which electron moves from an energy level to another one via a complete jumping .

Each electron in the atom has a definite amount of energy depending on the distance between its energy level and the nucleus , the energy of any level increases as its radius increases , Each energy level expressed by a whole number called the principal quantum number ( n ) .

When the electron acquires a quantity of energy – known as quantum – by heating or by electric discharge , the electron jumps temporarily to a higher energy level , This is in case that the absorbed quantum of energy is equal to the difference in energies between the two levels , and the atom is known as excited atom .

Since the electron in the excited atom is unstable , it returns back to its original level with emission of the same quantum of energy ( emission spectrum ) in the form of radiant light that appears in the form of characteristic spectral line of a certain wavelength and frequency .

Quantum is the amount of energy absorbed or emitted , when an electron is transferred ( jumps ) from an energy level to another , Excited atom is an atom acquired an amount of energy by heating or by electric discharge .

The multitude of atoms absorb different amounts of energy , then radiate their energies producing spectral lines , These spectral lines correspond to the energy levels from which their electrons are transmitted back to the ground state .

The spectral line of the hydrogen atom does not represent the electron transferring from :

It is impossible for an electron to move from its energy level to another , if the energy absorbed or emitted is less than one quantum , ( there is a half quantum for instance ) .

Despite of the great effort of Bohr to construct his atomic model , the quantitative calculations of his theory did not agree with all the experimental results .

The most important defects of Bohr’s theory :

The most important modifications are the following :

Bohr’s theory postulated that it is possible to determine both of the location and velocity of the electron precisely at the same time , but by applying the principles of quantum mechanics , Heisenberg concluded that the determination of both the velocity and position of an electron at the same time is practically impossible , So , to speak in terms of probability seems to be more precise , This is because the electron wave motion does not have a certain location .

Heisenberg uncertainty principle : The determination of both the velocity and position of an electron at the same time is practically impossible and this is subjected to the laws of probability .

Wave-mechanical theory of the atom

The Austrian scientist Schrodinger ( 1926 ) applied the idea of Plank , Einstein , De Broglie and Heisenberg and could to :

On solving Schrodinger’s equation , it is possible to :

The wave-mechanical theory changed our concept about the movement of the electron , where instead of speaking about the stable circular orbits as being completely forbidden for the electrons , the concept of the electron cloud is used to express the region of space around the nucleus .