He imagined the possibility of dividing any piece of matter to smaller parts , then dividing those parts into smaller particles and so on , until we reach to an undividable fragment , he named it an atom , In the Greek language : A means no and tom means divide .

He rejected the concept of the atom and believed that all matter – whatever their nature – are composed of four components , which are water , air , dust and fire .

It was believed that cheap metals as iron or copper can be changed into precious ones as gold by changing the ratios of these four constituents .

This miserable idea caused a retard of development in chemistry science for more than thousand years because the scientists were busy by changing cheap metals into precious ones . 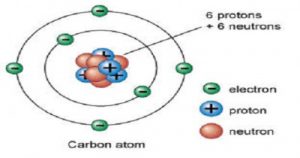 The Irish scientist Boyle refused Aristotle’s idea about the name of substance and gave the first definition of the element , The element is a pure simple substance that can not be changed to simpler forms by the traditional chemical methods .

The English scientist John Dalton stated the first theory about the atomic structure .

The scientist Thomson carried out many experiments on the electric discharge through gases from which he had discovered the cathode rays .

It was known that gases do not conduct electricity under normal conditions of pressure and temperature , However , gases conduct electricity in a discharge tube whose two poles are connected to an electric source of a suitable high potential difference and under a very low pressure .

If the potential difference between the two poles of the vacuum glass tube exceeds 10000 volts , a steam of invisible rays was emitted from the cathode ( the negative pole ) , causing a fluorescent glow on hitting the tube wall , These rays were named by cathode rays .

Cathode rays : A stream of invisible rays was emitted from cathode , causing a fluorescent glow hitting the discharge tube wall under very low pressure and potential difference of about 10000 volts , It was later known that they are composed of minute particles named electrons .

In the light of the electrical discharge experiment , Thomson suggested a new atomic model for the atom .

The postulate of Thomson’s model :

He considered the atom as a solid sphere of uniform positive electric charges in which a number of negatively charged electrons is embedded to make the atom electrically neutral .

The used tools : A deep lead box containing a source of alpha particles ( α ) inside it , A metal sheet covered from the inside with a layer of zinc sulphide ZnS which is used to detect the alpha particles , because it glows at the site of collision with alpha particles and a very thin gold foil .

The vast majority of α-particles penetrated the gold foil and hit the same places in which they appeared before placing the gold foil .

Most of the atomic volume is an empty space and the atom is not uniformly dense as proposed by Dalton and Thomson , The atom contains a tiny part of a very high density ( was named the nucleus ) .

The dense part of the atom ( where most of the mass is present ) appears to have a similar positive charge to that of α-particles , On the basis of his experiment and from the experiments of other scientists , Rutherford designed his atomic model as follows :

The postulates of Rutherford’s atomic theory :

Atom is an extremely small sized particles , It has a complicated structure resembles the solar system , since it’s composed of a central nucleus ( representing the Sun ) , where the electrons revolve around ( representing the planets ) .

Nucleus is much smaller than the atom and most of the atomic mass is concentrated in it , There is a vast space between the nucleus and the orbits of electrons ( the atom is not uniformly dense ) , It is positively charged .

Electrons have negligible mass compared to that of the nucleus , Their charge is negative and equals the nuclear positive charge ( the atom is electrically neutral ) .

Rutherford’s theory had failed to explain the atomic structure because it did not explain the system in which electrons revolve around the nucleus .