Importance and uses of esters in our life

Esters are used in many food industries because they are characterized by pleasant smells and tastes, so they are used as flavours, Saponification is the hydrolysis of fats or oils (triglyceride ester) in the presence of strong alkali as (NaOH) to produce glycerol and sodium salt of the fatty acid (soap).

Esters are used in the manufacturing of soap, the hydrolysis of fats or oils (triglyceride ester) in the presence of a strong alkali, such as (NaOH) or (KOH) to produce glycerol and (sodium or potassium salt of fatty acid) is known as saponification process which is the main reaction in the manufacture of soap. 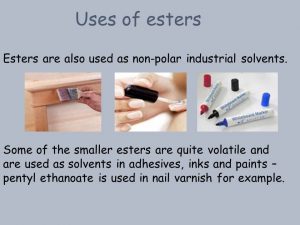 Esters as polymers (polyester): Polyesters are polymers produced from the condensation of two monomers, one of them is a dibasic acid and the other one is dihydric alcohol, The most common polyester is Dacron fibers which are prepared by the reaction between a terephthalic acid and ethylene glycol (ester formation reaction).

The condensation process proceeds continuously where the alcohol end of the ester reacts with the carboxylic group of a new acid molecule or the acid end of the molecule may be attached by a new alcohol molecule.

By the repetition of the condensation process, a very long molecule, which is called polyester is formed, since Dacron is an inert polymer, so, it is used to substitute the spoiled arteries and in the manufacture of artificial heart valves.

Polyesters are the polymers produced from the condensation of two monomers, one of them is a dibasic acid and the other one is a dihydric alcohol, Dacron is the polymer produced by the reaction between terephthalic acid and ethylene glycol, Esters are used in manufacturing of textiles because the esterification of terephthalic acid with ethylene glycol produces polyester which is used in dacron fibers industry.

Esters as medical drugs: Organic esters are used in the manufacture of many drugs such as Aspirin and Marookh oil, the most common and simplest one is aspirin, oil of wintergreen (Marookh oil) is used as a local oil absorbed by the skin to decrease the pains of rheumatism, The acid which is used in the manufacture of these two drugs is salicylic acid, its molecule contains both the carboxylic and hydroxyl groups, It reacts as an acid or as an alcohol.

Aspirin is the important drug which reduces the headache pains and temperature, it also reduces the blood clotting and prevents the heart crises, the active substance in aspirin is salicylic acid, however, the addition of acetyl group (CH3CO–) to the acid decreases its acidity effect and becomes tasteless, Aspirin is hydrolyzed in the body to produce salicylic acid and acetic acid.

The produced acids cause the excitation of stomach walls and may cause stomach ulcer, Therefore many doctors advice to crush the aspirin tablet as a powder before swallowing or taking it dissolved in water, there is a type of aspirin mixed with an alkaline substance like aluminum hydroxide to neutralize its acidity.

Aspirin is mixed with an alkaline substance like aluminum hydroxide to neutralize the salicylic acid and acetic acid which are produced from the hydrolysis of aspirin, Although the active substance in aspirin is salicylic acid, the acetyl group is added to it to decrease its acidic effect and to become tasteless.