Carboxylic acids are considered the most acidic organic compounds, however, they are not strong acids like the inorganic acids such as Hydrochloric HCl, sulphuric acids H2SO4, nitric acid HNO3 except H2CO3 (Carboxylic acids are stronger than carbolic acid & carbonic acid), Carboxylic acids are from a homologous series which are characterized by the presence of one or more carboxylic group (–COOH).

The carboxylic acids may be attached to an alkyl radical to give an aliphatic acid, or attached directly to a benzene ring and give aromatic acid, The saturated monocarboxylic aliphatic acids are named fatty acids because many of them are present in fats in the form of an ester with glycerol, The carboxylic acids (–COOH) is the functional group of organic acids, It is composed of two groups, The carbonyl group (CO) and the hydroxyl group (OH).

Acid basicity is the number of carboxylic groups in the molecule of the organic acid, Acetic acid is monobasic, however, it contains 4 hydrogen atoms because there is only one replaceable hydrogen atom that of the carboxylic group, Benzoic acid has one type of salt because it is a monobasic acid, it has one (–COOH) group. 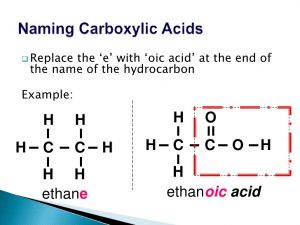 IUPAC nomenclature: The common name of acids are more used than the other common names of organic compounds, In the (IUPAC) nomenclature of acids, the name of the acid is derived from the corresponding hydrocarbon name which contains the same number of the carbon atoms by adding the suffix (oic) to the name of alkane instead of the letter (e).

Preparation of Acetic acid in industry

The biological method: Acetic acid (vinegar) is from the aliphatic carboxylic acids, It is prepared in Egypt by the oxidation of diluted alcoholic solutions by atmospheric oxygen in the presence of a special type of bacteria known as vinegar bacteria.

The biological method is the method used to prepare acetic acid by oxidation of diluted alcoholic solutions in the presence of vinegar bacteria, Acetic acid is prepared in the industry on a large scale by the catalytic hydration of acetylene where acetaldehyde is produced, which is easily oxidized to the acid.

The physical properties of organic acids are graduated by increasing their molecular masses, The first four members are corrosive liquids to the skin and posses pungent irritating odour, they are completely miscible with water, The successive members are oily liquids and have an unpleasant odour and sparingly soluble in water.

As the molecular mass of the acids increases, they become solids, odourless and insoluble in water, By comparing the boiling points of carboxylic acids with those of alcohols which have the same number of carbon atoms, we find that the boiling point of acids are higher, this is attributed to the association of molecules by the hydrogen bonds.

Carboxylic acids have an acidic effect on litmus paper, They turn blue litmus paper to red, although they are organic compounds because the hydrogen atom of the carboxylic group is ionizable, The boiling points of carboxylic acids are higher than that of corresponding alcohols because each acid molecule is linked to another molecule by two hydrogen bonds while the two molecules of alcohol are linked by only one hydrogen bond.

Reactions attributed to the hydrogen ion (Acidity and salt formation): The acidic property of carboxylic acids appear in their reactions with active metals above hydrogen in the electrochemical series, metal oxides, hydroxide and carbonate, bicarbonate salts, The hydrogen atom of the carboxylic acid is replaced by the metal atom and an organic salt is formed, All carboxylic acids are weak acids, their strength is much lower than inorganic acids except H2CO3..

Reactions attributed to the carboxylic group: Carboxylic acids are reduced by hydrogen in the presence of copper chromate CuCrO4 at 200°C as a catalyst, Ethanol may be prepared from acetic acid, By this method, this reaction is opposite to that of oxidation of alcohols to acids.

Ester formation test is the reaction of the organic acids with alcohols in the presence of a dehydrating agent, Acids react with the alcohols to form esters which are characterized by the pleasant odour and they are responsible for the odour and flavour of most of fruits and flowers according to the kind of alcohol and acid.