Esters are the products of the combination of carboxylic acids with alcohols, Esters are widely spread in nature, They are present in all plant and animal organisms, Most of the esters are characterized by a pleasant smell which is responsible for the odour and flavour of fruits and flowers.

Many organic esters have been prepared for the commercial production of perfumes and flavours, They are used either alone or mixed with natural compounds, The odour of the ester decreases by the increase of the molecular weight of the alcohol and acid used for their formation.

The nature of the ester changes from a liquid with a pleasant odour to a waxy solid which is nearly odourless, waxes such as bee wax are high molecular weight esters, Fats and oils are esters derived from glycerol which is trihydric alcohol and high fatty acids. 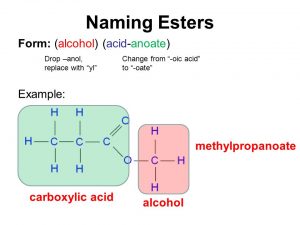 The direct method for the preparation of esters is the reaction between the carboxylic acid and the alcohol, For example, the ethyl acetate ester is obtained by the reaction of acetic acid and ethyl alcohol.

This reaction is reversible where the formed ester is hydrolyzed to the acid and alcohol, It is preferred to use a dehydrating agent such as concentrated sulphuric acid or hydrogen chloride gas to get rid of the formed water.

The concentrated sulphuric acid is used in preparing ethyl acetate ester to get rid of water to be sure that the reaction is shifted to the forward direction (direction of ester formation).

In the direct method to prepare Ethyl Benzoate Ester, Dry HCl is used for dehydration, not concentrated H2SO4 to avoid the sulphonation of benzoic acid.

Most of the esters are liquids with much lower boiling point than those of the acids or alcohols of nearly equal weight, this is due to the absence of the polar hydroxyl group which found in alcohols and acids and leads to the association of the alcohol and carboxylic acid molecules with hydrogen bonds, Esters have a neutral effect on litmus.

The solubility degree of ester in water is less than that of the corresponding acid due to the absence of polar hydroxyl group (presents in alcohols and acids) which has the ability to form hydrogen bonds between molecules and water.

Hydrolysis of esters may also be carried out by heating with aqueous alkalies, to produce the alcohol and the salt of the acid, this is called alkaline-hydrolysis or saponification, (since soap is the sodium salt of high carboxylic acids), NaOH is added to react with the produced acid converting it to salt and prevent the reversible reaction.

Hydrolysis of esters is the reaction of the ester with water (in an acidic medium) to form acid and alcohol, saponification is the heating of ester with aqueous alkalis to produce the alcohol and the salt of the acid, Soap is the sodium salt of high fatty carboxylic acids.

The esterification reaction is not a neutralization reaction as it is a reversible reaction “incomplete”, It needs a dehydrating agent, It is a slow reaction because it takes place between molecules, water is formed due to the combination of molecules, H from alcohol and OH from acid.

The neutralization reaction is irreversible reaction “complete”, It is a fast reaction because it takes place between ions, water is formed due to the combination of ions H+ from acid and OH− from alkali.

Importance and uses of esters in our life