The nucleus occupies a small space from the volume of the atom, It contains a number of nucleons ( protons and neutrons), Protons are positively charged & neutrons do not have a change , But , did you ask yourself , How does the nucleus keep its stability in spite of the huge electric repulsive forces ( named coulomb electric force ) between the positive protons compared with the small attractive forces between the nucleons ?

That’s due to the presence of other forces working on the combining of these nucleons , These forces are called the strong nuclear forces .

Properties of the strong nuclear forces

It is a great force , It doesn’t depend on the essence ( type ) of nucleons , but it may be between : ( proton – proton ) , ( proton – neutron ) , ( neutron – neutron ) and it is a short-range force , These forces arise from the binding energy between the nucleus constituents , which is working in combining the nucleons together .

The nuclear binding energy ( BE ) can be calculated from this relation :

Binding energy per nucleon = BE / A

Stable element is the element in which its atom’s nucleus remain stable by passing time without any radioactivity .

Unstable element is the element in which its atom’s nucleus decays by passing time as a result of radioactivity .

Atoms nuclei of the stable elements

The number of neutrons equals the number of protons , The ratio ( N / Z ) of their nucleons equals 1 , Such as light elements ( whose nucleons number is less than 38 ) .

Atoms’ nuclei of the unstable elements :

At the left side of stability belt : The reason of the instability of atoms’ nuclei : no. of neutrons is larger than the stability level ( N / Z ratio is large ) .

How the unstable nuclei reach the stability state : By emitting beta particles ß− (  negative nucleus electron ) from the atom’s nucleus of the unstable element to transform one of the extra neutrons to proton and ( N / Z ) ratio approaches the stability belt .

At the right side of stability belt : The reason of the instability of atoms’ nuclei :  No of protons is larger than the stability level ( N/ Z ratio is small ) .

How the unstable nuclei reach the stability state : By emitting positron ß+ ( positive nucleus electron ) from the atom’s nucleus of the unstable element to transform one of the extra protons into neutron and ( N / Z ) ratio approaches the stability belt .

How the unstable nuclei reach the stability state : By emitting alpha α from the atom’s nucleus of an unstable element to decrease number of nucleons ( 2 protons , 2 neutrons ) to approach the stability belt . 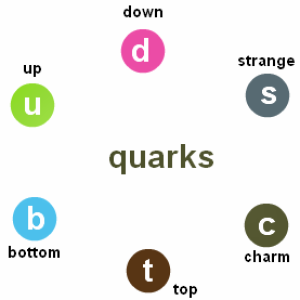 There are six types of quarks .

The composition of the proton ( p )

The proton consists of three quarks ( d , u , u ) , the positive electric charge ( Q ) of the proton can be calculated as follows :

The composition of the neutron ( n )

The neutron consists of three quarks ( u , d , d ) , the neutral electric charge ( Q ) of the neutron can be calculated as follows :

Example : The composition of the quarks in the nucleus of helium atom