The chemical properties of alcohols may be classified as follows:

Reactions specific to hydrogen of the hydroxyl group

Reaction with sodium (Acidity of alcohols): Alcohols have a neutral effect on litmus, but a weak acidic character may appear especially when it reacts with strong active metals, Sodium or potassium which can replace the hydrogen of the hydroxyl group forming metal alkoxide and hydrogen evolves.

Place 5 ml of ethanol in a test tube then add a small piece of sodium metal, cover the tube opening with your thumb to keep the evolving gas, Observe the effervescence and evolution of hydrogen gas which burns with a pop sound, After the reaction is completed evaporate the solution on water path and observe the formation of a white solid substance which is sodium ethoxide, the sodium ethoxide may be hydrolyzed giving ethanol and sodium hydroxide.

Ester Formation or Esterification (Reaction of alcohols with organic acids in the presence of conc. H2SO4): Alcohols react with organic acids to form esters, In this reaction, hydrogen atom is separated from the hydroxyl group of the alcohol molecule and the hydroxyl group is separated from the acid, this was proved by reacting the alcohol containing the heavy oxygen isotope O18, with acetic acid containing the normal oxygen isotope O18 by analyzing the oxygen of the formed water, it was found that it is of the normal isotope.

Ester formation is a reversible reaction, so concentrated sulphuric acid H2SO4 should be added to prevent the reversible reaction and to absorb water, Esterification is the reaction between alcohols and acids in the presence of the dehydrating agent, water is formed from H from alcohol and OH from the acid.

Reactions specific to the hydroxyl group

Because alcohols contain a hydroxyl group, so they react with halogenated acid and conc.sulphuric acid, Ethanol reacts with conc. hydrochloric acid (HCl) in the presence of zinc chloride ZnCl2 as a catalyst (dehydrating agent) to form ethyl chloride, The reaction of HI with alcohol is faster than HBr and HCl, where HI is hydrolyzed easier due to iodine has the largest atomic radius.

Reactions specific to the carbinol group

Alcohols are easily oxidized by an oxidizing agent such as acidified potassium dichromate or potassium permanganate, the products differ according to the type of alcohol, The action of the oxidizing agents is concerned with the hydrogen atoms attached to the carbinol that converts them to the hydroxyl groups.

We must put into consideration that when two hydroxyl groups are attached to the same carbon atom, the produced compound is unstable and instantaneously loses a water molecule and converted to a stable compound. 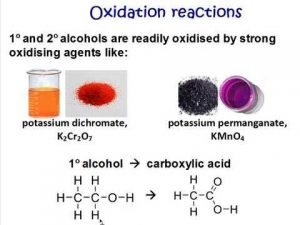 The two hydrogen atoms attached to the carbinol are oxidized in two steps, In the first step, the aldehyde is produced, then the acid is produced in the second step, for instance, ethanol is oxidized by hot chromic acid to acetaldehyde then to ethanoic acid.

Put three ml of ethanol in a dry clean test tube, Add the same amount of acidified potassium dichromate KMnO4 “violet” + conc. H2SO4, Heat the mixture in a water bath for 10 minutes then cool it, we observe that the colour of the solution changed from orange to green colour, The odour of vinegar (ethanoic acid) appears due to the formation of acetic acid.

If we use acidified potassium permanganate as an oxidizing agent, we notice the disappearance of its violet colour due to the oxidation of alcohol into acetaldehyde (odour of green apples), this reaction is used to detect the taking of drivers for liquors.

The single hydrogen atom attached to the carbinol group is oxidized in one step by the previous method, where ketone is formed, isopropanol is oxidized to acetone (propanone).

Reactions specific to the whole molecule

Dehydration means the elimination of H2O by using conc. H2SO4, Alcohols react with concentrated sulphuric acid and the reaction products depend on the number of alcohol molecules as well as the temperature used, when they are heated to 180°C, The water molecule is eliminated from one alcohol molecule to give an alkene.

All monohydric alcohols (primary- secondary- tertiary) form ethers, If the temperature is 140°C, the conc. sulpheric acid eliminate one molecule of water from every two molecules of the alcohol giving ether.

The economical importance of Ethanol

Ethanol does not use as an antifreeze substance in car radiators because it contains one hydroxyl group, so the result solution from its addition to water has freezing point not less so much than the freezing point of water.

Glycerol is used in the preparation of explosives because it reacts with a mixture of concentrated nitric acid and sulphuric acids forming trinitroglycerine which gives an enormous amount of heat and gases on being burnt.