Baidu Browser is a free web browser produced for the Windows & Android platforms , It can transmit the personal user data to Baidu servers without encryption & with easily decryptable encryption , It is the lightest browser on resources for low-end Android & it is vulnerable to the arbitrary code execution during the software updates via man-in-the-middle attacks .

Baidu consists of two characters , bai ( which means 100 ) and du ( degree ) , The first part (bai) refers to ( buy or bye ) , while the second part (du) refers to ( do or dew ) , The name was inspired by a poem written more than 800 years ago during the Song Dynasty and the Man Behind Baidu is Robin Li .

Baidu browser is one of many superb services offerings from Baidu , one of China’s largest technology companies , that include its search engine , a massive advertising platform and a Wikipedia-like collaborative encyclopedia .

Baidu Browser is produced & developed by China-based Internet giant Baidu , It is based on Google’s Chromium platform , It has many features beyond those found in standard browsers , such as integrated video & audio downloading tools , a built-in torrent client and mouse gesture support . 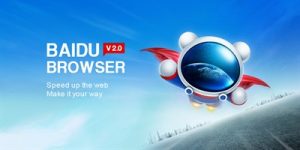 Baidu Browser can transmit personally identifiable data in Android version , like the user’s GPS coordinates , the search terms & URLs visited , without encryption and it can transmit the user’s IMEI & a list of nearby wireless networks with easily decryptable encryption .

Baidu Browser can transmit a number of personally identifiable data points in Windows version , such as the user’s search terms , the hard drive serial number model and network MAC address , URL and title of all web-pages visited & CPU model number , without encryption or with easily decryptable encryption .

Baidu uses Google playbook , the company has been leveraging its search business to move into the other market segments like video , mobile apps & music , Baidu has its own browser , It has a superb feature to proxy the requests to certain websites in Windows version & it can permit access to some websites that are normally blocked in China .

The asymmetric algorithms such as RSA were developed to address this weakness , While they are slower than symmetric algorithms , They have the advantage that a different key is used to decrypt data than the one used to encrypt , These keys must be mathematically related , but the algorithms are designed such that it is easy to generate a key pair but computationally intractable to derive the decryption key from the encryption key .

The third party cannot write a tool to do so since the decryption key is not present in the program , Baidu Browser’s encryption is easily decryptable because it is entirely symmetric & it uses hard-coded keys , Their communications encrypted using this method can be easily decrypted .

Baidu can securely send sensitive information over the Internet use a well-known & well-tested protocol utilizing asymmetric cryptography (such as SSL) and not attempt to implement their own home-brew encryption protocols , SSL is a well-analyzed protocol that addresses many security issues not likely to be considered by a nonprofessional cryptographer .

Baidu controls 78.6% of China’s search market , It uses a paid-click model , which has proven to be extremely scalable & profitable , It has 352,000 customers for its advertising business , which seems big , but there are about 40 million businesses in China , So , Baidu still is in the early phases of the market .

Baidu Browser do not protect software updates with code signatures in Windows & Android versions , So ,  The in-path malicious actor could cause the application to download and execute the arbitrary code , representing a significant security risk .

The data of the user is transmitted , in both the Windows & Android versions , unencrypted or with easily decryptable encryption , So , any in-path actor could acquire this data by collecting the traffic and performing any necessary decryption .

It manages & transmits user data during its operation , There are security concerns in both Windows and Android versions of the browser that may expose the personal user data , like the user’s geolocation , the hardware identifiers , nearby wireless networks , the web browsing data & the search terms .

Baidu faces strong rivals like Alibaba and Tencent , Microsoft also is making some inroads in the market , There are many non-wanted programs in Baidu along their products in your PC , You have to get rid of some infamous adwares & toolbars upon installing some Baidu software , It is not bad but it is very hard to do a complete uninstall .

It could be tough to dominate mobile search , as the company does not control the operating system , just like what’s plaguing social stocks like Facebook , shift to mobile will lead to lower revenues , at least in the short-run , It is already slowing , and there are fears that the economy might suffer a hard landing  , This would crush Baidu , considering that advertising expenditures are among the first that companies will cut back .