DDoS Attack is one of the most popular & frightening attacks of cybercriminals , It is used to attack the websites , It is accomplished by flooding the website servers with traffic that exceeds what the servers or bandwidth is capable of , The hackers target the sites or the services such as the banks , credit card payment gateways , but also business or personal websites for revenge , blackmail & activism .

DDoS ( distributed denial of services ) attack makes your website unavailable for the visitors interrupting or suspending services of the web host company connected to the Internet  , It is the most popular & easiest way to hack a website , DDoS attacks are the distributed attacks of a DoS hack where are involved more than one unique IP addresses .

DDoS attack is an illegal activity , It becomes a nightmare for companies with an active online presence , If your website goes down due to an overload of the website traffic , you are a victim of the notorious distributed denial of service (DDoS) attack . 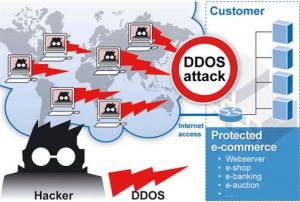 There are many ways to protect your website from DDoS attacks such as choosing the proper Internet Service Provider (ISP) which has the proper hardware and has a contract agreement with your web host , ISP offers DDoS mitigation , you can maximize up-time & protect your network links .

You can use the routers , the switches & the firewalls , They can stop simple ping attacks and stop invalid IP addresses filtering non-essential protocols & they provide automatic rate limiting , You should change the configuration of your switches & routers such that they automatically reject packets coming from outside your network , You can focus on encrypting different sessions on your router to allow trusted hosts who are outside your network .

You have to set up secured VPS Hosting , Many businesses opt for the lowest price hosting plans available in the market , While the initial cost is low , the threat of DDoS attack is outrageous , Setting up a secured VPS hosting offers DDoS protection and reduces the probability of an attack , The Virtual Private Network is the service that will connect your website to an offsite secure server .

You should create an action plan in advance , You have to use the sensors that send an alert whenever the website is down , in case of any malicious activity , dump the logs quickly , You have to consider contacting your ISP to understand about the free & paid DDoS protection plans , You should confirm the DNS TTL ( time-to-live ) for the systems that can be attacked in the future .

You can protect your website by having a properly configured server applications , you can minimize the damage of the DDoS attack , especially if an administrator defines what resources an application can use and also makes real-time updates in case of an attack .

You can use an intrusion-detection system ( IDS ) to detect anomalies regarding traffic , but this isn’t an automated system and you need manually to activate it , You can buy excess bandwidth that can handle various spikes in the traffic , You should monitor traffic levels as the DDoS attack brings an unprecedented amount of traffic to your server , which spikes the traffic beyond your imagination .

You can use an application front end hardware that analyzes the data packets and identifies the regular , priority or dangerous ones , You can use DDS based defense that can block the connection based DoS attacks and address protocol attacks .

You can protect your website by having a cleaning center that uses various methods such as proxies , tunnels & circuits separating legitimate traffic from the bad one , You can use the IP verify unicast reverse-path that verifies each packet received for DDoS attacks .

You can dump the logs because your web server logs can’t tell the difference between good traffic and bad traffic and the log files are becoming too large , You can capture evidence using a Linux workstation that can process the flow of packets and the snoop program to capture them .

Many softwares can help you protect your website against DDoS attacks such as CloudFlare which offers protection against DoS attacks of all forms and sizes , CloudFlare defended more than 2 million websites and the largest DDoS attack stopped was about 600Gbps .

You can use DDoS Protector that blocks DoS attacks within seconds with multi-layered protection and it presents up to 40 Gbps of performance , It uses new techniques & traditional ones to block many attacks that have the advanced challenge techniques , behavioral protection & automatically signatures .

You can use Secure64 DNS Authority which has DNS DDoS mitigation protecting DNS servers and bandwidth , Secure64 DNS Authority can detect the high volume of DDoS attacks allowing you to ensure the availability of your DNS while the attacks , it can eliminate the over-provision and the need for dedicated network security equipment .

Hackers find their way through connected devices to disrupt the services of a brand , For stronger DDoS protection , change the passwords of the devices regularly , You should switch off the devices when not in use & verify every device before connecting it .

You should ensure that you have extra Bandwidth , because over-provisioning your bandwidth offers extra time to identify & deal with the attack , It allows the server to accommodate unprecedented spikes in traffic and to  lower the intensity of the attack .

You should train the customers on security , because hackers target computers with weak passwords , You should filter UDP traffic with remote black holing that can effectively stop undesirable traffic to enter a protected network , Security plugins optimize your website to minimize DDoS risk , WordFence is a great choice , as it is Bulletproof Security .

DDoS attacks have the potential to create a havoc on your business and you need to stop the traffic from false sources at any cost , You have to focus on using the access list at the perimeter of network to prevent the malicious activities .

Purchasing a dedicated hosting server will offer more bandwidth , control over security & countless resources , With a dedicated server as your first layer of defense , you can successfully run your online site with thousands of legitimate customers without worrying about anything and you have to block spoofed IP addresses .

You have to create an access control list (ACL) to deny all inbound traffic with a particular source IP , You can focus on using reverse path forwarding (RPF) or IP verify , It works similar to an anti-spam solution , You can filter both outbound and inbound traffic to enhance DDoS protection .

Installing updates on open source platforms like WordPress as soon as possible mitigates the risk of attack because the potential security loophole is filled with an update , You can set up RST Cookies , the server sends incorrect ACK + SYN to the client and then the client forwards the packet telling the server about the potential error , So , it prevents the business from the potential attack .

You have to monitor half-open connections , by adding an empty keep-alive message to the application protocol framing , You should use proxy protection , It offers an extra layer of DDoS protection for any website and keeps your website safe from complex cyber threats .