The cancer surgeon removes the tumor in the first part of the surgery, then the plastic surgeon then steps into performing surgery on the breasts to make them more symmetrical, Oncoplastic breast surgery reflects the integration of chemotherapy and radiotherapy planning with conservative forms of breast surgery.

Breast cancer is the most common cancer in women throughout the world, Breast-conserving surgery (BCS) and radiotherapy (RT) offer similar local control and survival rates to radical procedures in the surgical treatment of early breast cancer, The primary aim of BCS is the preservation of the breast while adhering to oncologic principles, with the secondary objective to offer breast aesthetics, with advances in early detection and adjuvant therapy. 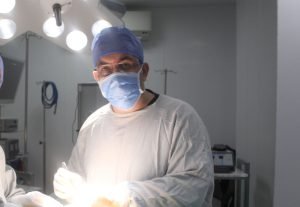 Mastectomy rate is decreased and organ loss is reduced by the application of OBS techniques, The implementation of these techniques avoids mastectomy and the associated wider reconstructive methods as well as additional complications related to these procedures, Safe oncologic and acceptable aesthetic results are provided especially in breast tumors.

Breast aesthetics that identifies and complements the female body is important, OBS improves aesthetic results in the surgical treatment of breast cancer, BCS allows conservation of the breast in cancer surgery, and OBS solves aesthetic problems of the breast with higher rates of excellent results by the use of oncoplastic techniques.

Wider resection of the tumor is possible with OBS, and the excessive breast tissue is removed, The similar procedure is applied in the opposite breast, After pathological evaluation of the contralateral breast and breast symmetry is provided.

During oncoplastic breast surgery, the cancer is typically removed with a wider margin of normal tissue around it, removing potential and undetected cancer cells that would otherwise remain located in the margin. With single anesthesia and a single hospitalization, patients can continue with radiation and/or chemotherapy if indicated.

Complete mastectomy compared to oncoplastic surgery is an operation with higher short- and long-term potential morbidity in addition to the psychological stress of losing a breast, The mastectomy without reconstruction has the drawback of poor cosmetic improvement and gross breast asymmetry that the oncoplastic surgery clearly does not.

Oncoplastic surgery offers excision of breast tumors with wider limits and in a more secure way, It has been shown that using this technique, especially in cases with the removal of large tumors and locally advanced breast cancer, improves outcomes, In addition to improving cosmetic results in breast cancer surgery, OBS reduces oncological problems associated with BCS.

Oncoplastic surgery requires a contralateral symmetry operation if the patient wants to have a symmetric outcome to facilitate bra wearing and obtain an excellent aesthetic outcome, Oncoplastic breast surgery still falls under the wing of breast conservation surgery and as such requires that at least the whole breast radiation can be given to the cancer-affected breast.

Oncoplastic surgeries often leave longer scars and require an additional surgeon, usually, the skill of the plastic surgeon, This means coordinating schedules and setting up another doctor visit, which increases the burden on the patient and may delay surgery, There have been reports of fat necrosis, especially after smaller tissue rearrangement oncoplastic surgeries. 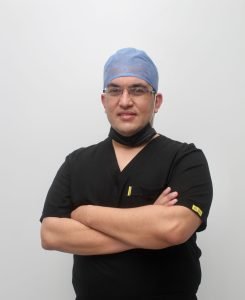 Dr. Mohamed Farouk Asal is a clever and famous oncoplastic surgeon in Egypt, He earned a doctorate degree in Oncoplastic breast surgery, from Alexandria University, Faculty of Medicine‎‏, He is Oncology and Endoscopic Surgery Instructor.

Dr. Mohamed Farouk Asal is a Lecturer at the surgical oncology unit, Faculty of Medicine‎‏, Alexandria University‎‏, Egypt since 2017. He earned ‏‎a Master’s Degree in surgical oncology, in 2013. He earned a Fellowship from the Royal College of Surgeons in 2017, He is specialized in Onco-surgery, and Laparoscopic Surgery.

The robotic-assisted, nipple-sparing mastectomy is performed through a small incision with a robotic camera and small instruments attached to a robotic arm, which is controlled by the surgeon at the computer console. Nipple-sparing mastectomy is used for both reducing surgery risks and cancer treatment, The aesthetic aspect that comes from it, made new surgical techniques be thought of a better result, Small incisions, oncoplastic techniques, endoscopic techniques, and robotics are being practiced providing the best aesthetic result.

The robotic mastectomy surgery has the benefit of lower complication rates because there is no ischemia and skin trauma caused by retractors in relation to open surgery, Other benefits are the tenfold magnification of the surgical field, the correction of the delicate movements performed by the robot, and the fact that the operation is more comfortable for the surgeon and the entire surgical team, the main benefit is aesthetic, and the scar in the axillary region, far from the breast, is the most positive factor pointed out by patients, The main drawback is still the higher cost than open surgery.

There are no space restrictions, the surgical robot operating system is more flexible and precise, It offers a quick recovery, Compared with laparoscopic surgery, The surgical robot wrist joint is much more flexible and it can take multiple positions in a 360°dimension in order to readily match the surgeon’s personal style during the operation, the operating arm can intelligently filter out human hand vibration.

Surgical robots allow the surgeon to position and manipulate tissues confidently and accurately, the surgeon can take a sitting posture for the operation during a long time and complicated operation, The screens can display real-time images of the surgeon’s hand movement.

The da Vinci Si® Surgical System is used to perform the nipple-sparing mastectomy surgery, first, the inframammary fold is marked with the skin pen, the mid-axillary line, and the incision is made at nipple level, around 2/3 of the mid-axillary line, The marking divides the breast into 4 quadrants by 2 perpendicular straight lines at the nipple height.

The left arm of the patient remains open with bulkheads on the head and arm to protect the patient in case the robot arms touch these parts, To facilitate dissection and reduce bleeding, 500ml of saline 0.9% diluted with adrenaline 1mg/ml is infiltrated through the incision into the subdermal breast tissue in all quadrants, Multiple tunneling is performed with Metzenbaum scissors for dissection and release of subdermal breast tissue.

The device (GelPOINT Advanced Access PlatformTM) is attached to the previously made space. It contains four trocars from 5 to 12mm for the camera, instruments, and gas access, So that the forceps do not touch the patient’s arm, and the robot is placed contralateral to the operation, The gas pressure used was 8mmHg, The camera chosen was a rigid 30 degree (up and down as needed) 12mm diameter camera, placed centrally in the portal.

In the robotic arm 3, the ProGrasp forceps are allocated, in arm number 1, the monopolar curved scissor forceps and in the middle arm, the video camera is placed, The assistant is of fundamental importance in the surgery, reporting the quadrant that the surgeon is in and the thickness of the skin through the passage of light through the flap and helping with the traction of the nipple when it is manipulated by the surgeon.

Initially, the superficial dissection is done by the upper quadrants and then by the lower quadrant, leaving the retro nipple region last. After that, the separation of the mammary tissue from the pectoralis major musculature occurs, until the complete extraction of the mammary gland. The space between the major and minor pectoral muscles is created with robotic surgery for the allocation of the 400ml expander.

The plastic surgery team refines the space between the pectorals and introduces the submuscular expander, nº 4.8 drains into the submuscular and subcutaneous store, The skin is sutured with Monocryl® 3.0, continuous intradermal stitches.

During nipple preserving mastectomy, the surgery is a technical difficulty, through large incisions, access to quadrants distant from the incision is difficult, and with the risk that resection of the entire breast parenchyma will not occur, the complication rates can reach up to 50% of the surgeries, such as skin and areola-papillary complex necrosis, extrusion of the prosthesis and other minor ones, such as hypertrophic scars and keloids.

Types and side effects of hormone therapies for Breast cancer