The female mammary gland (breast) is an exocrine gland that is concerned with milk production in lactating female. It is a modified apocrine sweat gland (compound tubulo-alveolar), and the glandular tissues are located in the fatty layer of the superficial fascia of the pectoral region. In male, the glandular tissue is rudimentary with scanty fat around it.

Shape: Hemispherical in shape has an extension into the axilla, called the axillary tail. Some individual variations may happen according to sex, age, body weight, and lactiferous status.

Size and contour: They are variable, but the location and size of its base are fairly constant.

Base of the mammary gland

It rests upon the deep fascia covering pectoralis major (PM) and serratus anterior (SA), and external oblique (EO) muscles. The base extends from the 2nd to the 6th ribs and from the lateral margin of the sternum to the mid-axillary line. The nipple in the male and preadolescent females lies opposite to 4th or 5th intercostal space. The breast is separated from the underlying muscles by loose areolar tissue. superficial to deep fascia, called retro-mammary space. 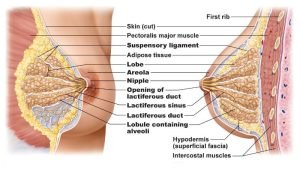 Through veins accompanying the supplying arteries.

a)- Anatomical analysis of the physical signs of cancer of the breast:

b)- In case of breast abscess incision must be done in a radial direction, to minimize ducts damage.

I- The covering skin

The mammary gland is covered by thin skin rich in subcutaneous fat. The covering skin forms a cylindrical, brownish elevation, and the nipple that consists of dense connective tissue and smooth muscle fibers. The nipple has 15-20 pore-like openings; each is belonging to one lactiferous duct, the excretory ducts of the mammary gland.

The lactiferous ducts become dilated shortly before their terminal opening at the summit of the nipple to form the lactiferous sinuses. The pinkish-colored area around the nipple is the areola. It becomes highly pigmented during pregnancy.

The glandular tissue is formed of connective tissue stroma and secretory parenchyma. During childhood, the mammary glands are rudimentary, consisting only of a few ducts lined with flat epithelial cells, which are surrounded by a small amount of connective tissue (stroma).

At puberty, the mammary glands develop mainly by the effects of estrogens and progesterone secreted from the ovaries. Other hormones such as thyroid hormone, adrenal corticosteroids and insulin have only a permissive effect on the development of breasts.

Role of estrogens: estrogens cause the proliferation of the ducts, deposition of fat, growth of stroma and development of nipples. Such effects require the actions of other hormones, particularly the growth hormone which causes protein deposition in the glandular cells which is essential to glandular growth.

Role of progesterone: It causes growth of the lobules and alveoli of the breast.

The mammary gland has no capsule. Thick interlobar connective tissue septa arise from the reticular layer of the dermis. radiating from the nipple and extend to divide the gland into 15-20 irregular lobes. Each lobe is further subdivided into lobules by interlobular septa formed of connective tissue rich in adipose tissue.

In larger interlobular ducts the epithelium changes from columnar to two layers of cuboidal cells. These ducts unite into a single lactiferous duct that opens separately on the summit of the nipple Myoepithelial cells are present between the epithelium of the ducts and their basal lamina.

The lactiferous duct and its dilated lactiferous sinus are lined by stratified squamous epithelium. During each menstrual cycle, especially at the time of ovulation, some histological changes occur in the mammary glands in the form of proliferation of the duct system and increased vascularity of the intralobular connective tissue.

B. Mammary gland during pregnancy

The glandular alveoli begin to secrete the colostrum, a serous fluid rich in protein and with low-fat content. Such secretory activity causes further enlargement of the breasts. Active milk production is not established until a few days after delivery.

After delivery, the alveoli of the mammary gland start active milk production andlactation. Milk synthesis is an active secretory process, which is stimulated by prolactin hormone and chorionic somatomammotropin whereas milk ejection is caused by oxytocin.

Milk is produced inside the columnar epithelial cells of the secretory alveoli and accumulates in their lumina and inside the ducts. Milk secretion involves the following mechanisms:

The alveoli are surrounded by stellate myoepithelial cells, their processes surround and pass in between the secretory cells of the alveoli to squeeze them and push the milk through their lumina to the duct system. Spindle-shaped myoepithelial cells are oriented longitudinally along the smallest ducts between the epithelium and the basal lamina. The act of suckling initiates hormone production and establishes milk secretion, thus the alveoli of adjacent lobules may appear in different grades of activity:

After menopause, involution of the glands occurs, characterized by:

Development of the mammary gland

The first indication of mammary glands is found in the form of a band-like thickening of the epidermis, the mammary line or mammary ridge, In a 7-week embryo, this line extends on each side of the body from the base of the forelimb to the region of the hindlimb.

In animals, several mammary glands are formed along this ridge, In human, the ridge disappears except for a small part in the pectoral region, This localized area thickens, becomes slightly depressed, and sends off 15 to 20 solid cords, which in turn give rise to small, solid buds, They grow into the underlying mesenchyme.

By the end of prenatal life, the epithelial cords are canalized and form the lactiferous ducts, and the buds form small ducts and alveoli of the gland, Initially, the lactiferous ducts open into a small epithelial pit, This pit is transformed into the nipple by the proliferation of the underlying mesenchyme, At the fifth month, the areola is recognized as a circular pigmented area of skin around the future nipple